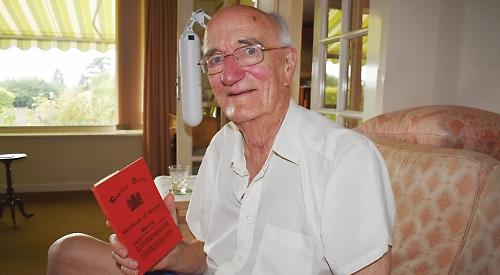 A MAN had to spend his 95th birthday alone due to the coronavirus restrictions on social distancing.

John Fryer, who lives in Wargrave, is thought to be the village’s last surviving veteran of the Second World War.

He had planned to invite friends to be with him on his birthday on March 27 but had to cancel the celebration.

Mr Fryer, who is a member of the parish council, received about 25 cards and many phone calls from his family and friends.

He said: “Both of my children called me to wish me a happy birthday and I had a very nice card from the Thursday lunch club, which was lovely. I had a birthday party with lots of eating and drinking planned but we had to cancel that.

“I still try to get out for exercise when the weather is good. I have also been spending a lot of time in the garden doing jobs I probably should have done before to keep the body moving.”

Mr Fryer was just two when his family came to the village in 1927 and they lived in Dark Lane.

He joined the army when he was 18, giving up an engineering course in the Midlands to do so.

He joined the Rifle Brigade and was trained in Yorkshire and had officer training in Winchester before being posted to northern Italy. He was part of a team that supervised the transport of thousands of German prisoners of war back home after the Allied victory.

He completed his officer training and became a lieutenant and helped train troops around Britain.

Mr Fryer and his wife Maureen were married at St Mary’s Church in Wargrave in 1950 and had a son Simon, who now lives in Hampstead Norreys, and a daughter Philippa, who lives in Olney. Mrs Fryer died three ago, aged 92.

The couple lived in Peppard and Caversham before moving to The Walled Graden in Wargrave 30 years ago.

Mr Fryer has been a member of the Wargrave branch of the Royal British Legion for more than 25 years and spent four years organising the village’s Poppy Appeal.

He laid a wreath at the village war memorial last summer to mark the 75th anniversary of the D-Day landings.

He was supposed to be a guest of the Legion during Wargrave’s V E Day street party on May 8 but the event has been cancelled due to the covid-19 outbreak.

Mr Fryer is also a member of the Wargrave branch of the Royal National Lifeboat Institution and used to be a volunteer driver for the elderly. Until last summer, he spent 25 years mowing the green at St Mary’s Church.