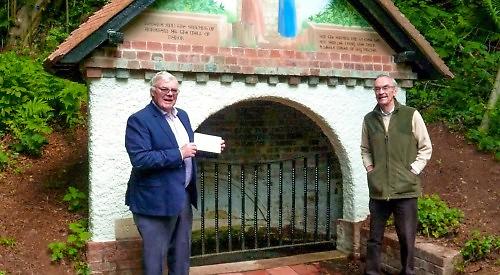 AN historic well in Crazies Hill has been refurbished for its 150th anniversary.

Rebecca’s Well was overgrown with weeds and there was a large amount of debris inside that had to be removed.

The work, which also included restoration and painting, cost  £2,840 and was paid for by the Wargrave Heritage Trust.

It had been estimated to cost £5,400, but the figure was lowered when the repairs were found to be less extensive than anticipated.

The brick well head, which is Grade II listed, dates back to 1870 when Rev Greville Phillimore, the curate of Wargrave, raised £25 to provide a basin and the structure,  which remains today. In recognition of his efforts, the well was called Phillimore’s Spring but it has since reverted to its traditional name, which refers to the Bible story in which Rebecca gave water to a needy traveller.

The trust said the restoration was also a birthday celebration.

Honorary secretary Peter Halman said: “Although tucked away a few minutes’ walk from the centre of Crazies Hill, Rebecca’s Well was of major importance to the community for many generations, being one of the main sources of clean drinking water.

“It has been beautifully restored by local craftsman Michael Hill, who repaired the roof and painted the woodwork and metal fittings. He has also carefully restored the decorative painting, when that was also restored some years ago.

“The work came in considerably under the original estimate. Mr Hill couldn’t know the extent of the damage until the panels were removed to see which pieces needed replacing.”

Parish council chairman Dick Bush met Neill Pitcher, the trust’s chairman, at the well to mark the finish of the three-week project.

Mr Halman said: “On this occasion there could be no handshakes but warm words and good wishes were exchanged to mark this lovely old building’s 150th birthday.

Councillor Bush thanked Mr Pitcher and said: “We are delighted to see this important local landmark restored to its former glory. Rebecca’s Well played an important part in the lives of local people for a long time and its preservation is important for future generations.”

The painting of Rebecca on the well head was designed by Gertrude Jekyll, a famous Victorian garden designer, artist and writer who lived for a period at the house now known as Wargrave Manor.

The inscription reads: “Rebeka and the servants of Abraham at the well of Nahor. And the servants ran to meet her and said let I pray thee drink a little water of thy pitcher.”

At the back is a carved stone inscription with a cross above in a segmental stone panel.

The parish council has carried out repairs to the well many times, including the installation of the iron railings at the entrance to make it more secure.

In recent years, the appearance has suffered due to missing roof tiles, water ingress in the brickwork and overgrown plants.