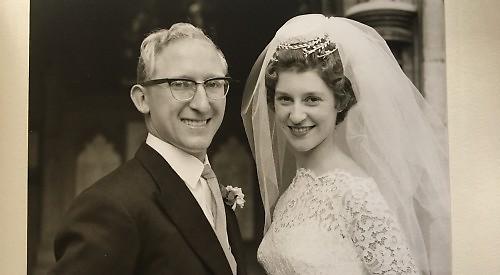 A COUPLE marked their diamond wedding anniversary by hosting a small party at home.

Tony and Janet Elliott had expected to celebrate the occasion on Thursday, June 11 with a family gathering of about 30 people at Phyllis Court Club in Henley.

However, they were forced to call this off when the country was put in lockdown due to the coronavirus outbreak.

Instead, a small group of relatives enjoyed a champagne reception outside the couple’s house in Wargrave, where they have lived since the Seventies.

This comprised their children, Susan and Russell, and their partners and two of their four grandchildren. Their other son, Mark, was unable to attend.

Everyone chatted while keeping a 2m distance between their different households and presented the couple with two large silver balloons shaped like the numbers “6” and “0”.

The Elliotts had met some family members individually but this was their first get-together since the lockdown was imposed on March 23. They hope to enjoy their meal at Phyllis Court once the Government says hospitality venues can re-open.

The couple are yet to receive a card from the Queen as the pandemic has delayed the Royal household’s administration.

Mr Elliott met his wife, née Ward, at a dance in Isleworth when she was 17 and he was 22. She was working in London as a dressmaker and he was staying with an aunt after finishing national service as a Royal Air Force radar technician during the Malayan Emergency.

He proposed some years later after seeking his prospective father-in-law’s permission.

They were married at St Mary’s Church in Osterley in 1960, then moved to the Midlands, where Mr Elliott had accepted a managerial post in the scrap metal industry.

They briefly returned to London, then bought a house in Emmer Green as Mr Elliott had grown up in Reading and was setting up a metal business with his brother Barry. The pair ran the venture until Mr Elliott retired in the Nineties.

In 1971 the Elliotts moved to Ridgeway in Wargrave, which at the time was part of a new housing development.

In 1979 they moved to Braybrooke Road, where they remained until they downsized a few months ago by moving to High Street.

Mr Elliott, 86, was a governor of the Piggott School for many years as the children went there and in the Eighties he was key in helping headteacher Keith Patton to introduce a sixth form.

He is also president of the Wargrave branch of Royal British Legion, having previously served as chairman.

Mr Elliott says he has always enjoyed supporting the community.

His wife, who is 81, stopped working to bring up the children but served more than 30 years with the village scout group, including a period as Akela for the cubs then as group scout leader.

She arranged the flowers at St Mary’s Church in Station Road for many years, only stepping down from the role recently.

The couple, who can recall receiving a weekly salary of just £3 when they started working, have travelled to countries on all five continents, including Singapore, South Africa, Australia and Hong Kong.

Mrs Elliott said: “I can’t believe we’ve reached our 60th anniversary — the time seems to have absolutely shot past.

“We enjoyed our celebrations even if we couldn’t do very much. We had a super time and the weather was perfect.

“It was strange seeing everybody again but we were very lucky to be able to do something. We’ve got more than some people have, even if our garden is the size of a postage stamp.”

Mr Elliott said: “Reaching this date makes me feel very old but it’s a wonderful thing. I’m proud that we can look back with absolutely no regrets as we’ve had a wonderful life together.”

Their daughter, who lives in Pangbourne, said: “We couldn’t let the occasion pass without celebrating it in some way as they were getting fed up of life in lockdown.

“There weren’t huge amounts of people but it was still a day to remember.”