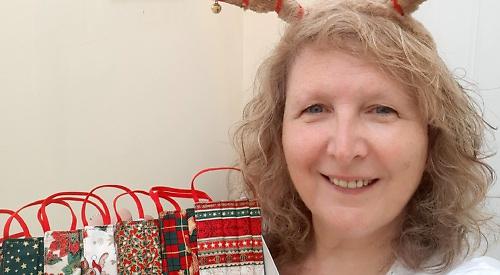 A WOMAN from Wargrave has raised nearly £1,800 for charities by making face masks.

Susanna Farrow, of Blakes Road, began crafting back in March when the coronavirus lockdown began.

Since then, she has made 1,220 of the face coverings, which come in adult and child sizes.

She asked her customers to make a donation to any of nine charities including Mind, SafeLives, the Alexander Devine Children’s Hospice, the Sue Ryder Duchess of Kent Hospice, the Thames Valley Air Ambulance, Cornwall Air Ambulance, Age UK, Macmillan Cancer Support and the NSPCC.

Mrs Farrow, a retired admin assistant, has recently been making Christmas face masks, which are proving to be popular.

She said: “I’m doing something I enjoy that has kept me busy and it has helped me to cope with what is going on. It has been lovely to meet so many people, albeit socially distanced and quite carefully. My front door has never been sprayed with so much anti-bac. I think meeting people has been what has helped because it makes you feel less isolated.

“I stopped for a while because I wanted to do other things. I took a break for about 10 days. I was chasing my tail so much, so I wanted to make a big batch of them and then advertise them. It took me about two weeks to make them and I put it on Facebook to tell people about the first lot that were available. I will make some more over the next month but that will probably be it.”

Her first batch of 100 Christmas masks sold out within a week and she hopes to make another 100 to keep up with the demand. The adult masks are decorated with holly patterns, while the children’s ones have cartoon teddy bears and reindeer on them. She has been asking for £2.50 for each one as she has had to order some of the materials.

Mrs Farrow added: “I had the fabric already because I used to make Christmas bunting about 10 years ago and this was left over. They are all made of quilting fabric and are pure cotton. They are washable so people can reuse them. I’m lining them with a dark green fabric just to make them a bit more Christmassy.

“October seems incredibly early but I wanted to see if people would be interested. You can buy them everywhere now. I was amazed by how many people came forward.”

Mrs Farrow lives with her husband Stephen, a financial consultant, and they have two grown-up daughters. She used to work for surveyors Hunt & Nash in Wargrave before retiring two years ago. Before that, she worked for Baker Hughes, an oil industry firm, for 13 years.