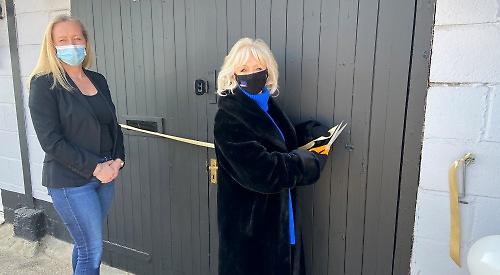 A FAMILY business in Wargrave has celebrated its fifth anniversary by moving into a bigger office.

Lucy Roberts and her father Dick Goodall started Active Silver, which sells colloidal silver as a health remedy, in 2016.

A small celebration was held at Sheeplands Farm, off Wargrave Road,  to mark the occasion and was attended by broadcaster and TV personality Debbie McGee, who lives in the village.

Mr Goodall lives in the village with his wife Maggie and has 50 years’ experience in the water treatment industry. His daughter is a former events and communications manager who lives in Wargrave with her husband Nick, 44, and their three children, Will, nine, Barney, seven, and Rosie, four.

They went into business together after discovering that colloidal silver kills bacteria.

All products are made in their own labratory using electrolysis. Mrs Roberts, 44, said: “We’re still at Sheeplands Farm but we’re just in a bigger unit.

“I do sometimes have to take a step back and ask myself, ‘Did we really do that?’ because when we first started the website it was two months before my third child was born.

“The first year was a slow build, but since then we have gone from strength to strength.

“These five years have gone quite quickly but it has been nice building the business while being a mum and working with your family. I’ve absolutely loved it. I’ve always had a good relationship with my dad — we are very similar in many ways and we work well together.”

McGee promoted Active Silver’s products while she was a contestant on the BBC’s Strictly Come Dancing in 2017 and sales shot up by 3,000 per cent as a result.

Mrs Roberts said: “Debbie is lovely and her time on Strictly was amazing for us.

“She has always been a customer of ours and genuinely loves all the products.”