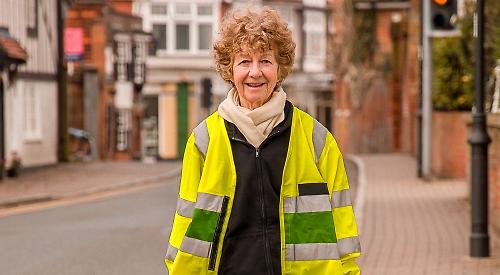 A WOMAN from Wargrave has recruited a team of volunteers to help keep the village tidy.

Judith Stephenson-Hodges became aware of the increase in rubbish during the latest lockdown and decided to do something about it.

The village’s heritage bins are often overflowing with takeaway coffee cups, with more left by the side or on top, and lots of face masks are dumped on the ground.

Mrs Stephenson-Hodges, a retired nurse who worked at Wargrave Surgery for more than 26 years, lives in High Street with her husband Tim, who is a professional photographer.

She first noticed the problem while she was out jogging and formed her group a month ago.

She had been helping the Victoria Road surgery by finding volunteers to assist with the covid vaccination clinics and decided to use her list of email addresses to see what interest there was locally in litter-picking.

Now she has 38 volunteers who each have an area to cover.

Mrs Stephenson-Hodges, whose own patch is the Wargrave to Henley Road (A321), said: “I got a lot of people within the first week and since then there have been dribs and drabs.  We are covering most of the roads in Wargrave. I’ve said to people they can do this weekly or fortnightly because it is all better than nothing.

“It was obvious that the amount of coffee cups in the village was increasing and everyone was beginning to notice the bins were overflowing.

“The one thing I don’t want to do is pick one of those masks up and carry it to the nearest bin.

“When these litter bins are full, not only do people leave rubbish by the side or on top, but they also throw it behind, which I think is really irritating. Why can’t they take it home? This is also about protecting animals and green issues and we know that animals get trapped in plastic.

“The thing that has given me the most satisfaction is helping with the vaccine but all the psychologists say that people who volunteer are happier. It is very encouraging that so many people have got involved.”

During a recent visit to her patch, she managed to fill two large rubbish bags from a short section of the verge. Her “finds” included a purse and a barrel of cider.

Mrs Stephenson-Hodges said: “I’d collected there before but only ever went on the footpath and not the verge side.

“It was just the worst patch and those two bags were really as much as I could carry.

“It was only about 15m worth but I couldn’t believe I got that much from that short patch.”

She added: “The more people that sign up, the better. When people who’ve volunteered have to go back to work, we won’t have as many people but then we might have fewer coffee cups, too.”

Other areas that have been highlighted as being a problem are Mill Green, Mumbery Hill and the A4.

Drink cans, food packets and excrement have been found by volunteers.

Two coffee shops, Daisy Love and H’artisan, have arrived on the high street in the last six months but the owners of both have taken steps to help tackle the litter problem. They have introduced bins for their customers to use and Nick Hart, who runs H’artisan, has even taken to removing cups from the bin outside Woodclyffe Hall, which is on the opposite side of the road.

The bins are emptied every Wednesdays by Veolia, the waste contractor for Wokingham Borough Council, which is responsible for collecting waste.

Wargrave Parish Council has asked the borough if the village could have more bins but has not yet had an answer.

The existing heritage bins are small and installing larger ones might not be possible as they musn’t protrude on to the pavements.

The village’s annual litter-pick, which is organised by parish councillor Marion Pope and would normally be held in March, did not take place this year or last due to the coronavirus restrictions.

The volunteers are provided with litter-pickers, reflective jackets, gloves and blue rubbish bags.

If you would like to help, email Mrs Stephenson-Hodges at  judith@wargrave.me