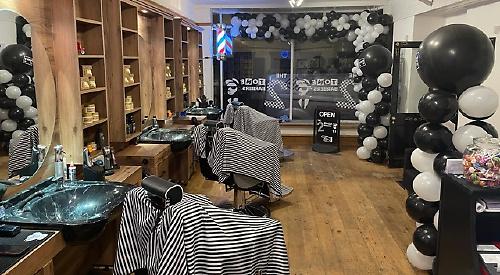 A BARBER’S shop has opened in Wargrave.

2 Tone Barbers in High Street started trading on Monday last week, the first day that non-essential businesses were allowed to open under the coronavirus roadmap.

The business is located at the former village post office and run by Kieran O’Connor, who lives in Charvil with his fiancée Emily Hatt and their children Roman and Jenson.

He said: “It is something I had been thinking about for a while and the village was nearby.

“It’s a nice community village and I like the area. There are lots of new things, like the coffee shops which have opened recently.”

The salon, which has a ska theme made famous by the 2 Tone record label of the early Eighties, currently has three chairs, but Mr O’Connor says there is room for another one.

He said: “I think the date for hairdressers opening was about right and I just hope we don’t go backwards.”

2 Tone currently has three staff and Mr O’Connor plans to offer women’s hairdressing too when Miss Hatt finishes her maternity leave and joins the business.

“We will give it six months or so and then we will slowly start to do women’s hair,” he said. “It has gone really well so far — we’ve had about 40 people per day. I myself am fully booked for the next couple of weeks but we’re still doing walk-ins because we have the other two barbers.

“We’ve had lots of great feedback and everyone loves the team. As long as we keep our clients happy and offer a great service then they will keep coming back.”

The barbers is open from 9am to 6pm on weekdays with an extra hour on Thursday evenings, and from 9am to 4pm on Saturdays.

It offers classic cuts, beard trims, wet shaves and nose waxing. Clients receive complimentary hot towels and drinks and there is a loyalty card scheme with every sixth visit half price.

Mr O’Connor said: “This is my first business, but I’ve been barbering for 10 years. I worked in Malta for a year and in Crete for a year. I was offered jobs there and my family live in Greece.”

The post office closed in June 2008 and since then the premises has been used as a florist, coffee shop and pop-up Christmas shop.  It was empty for about a year before Mr O’Connor leased it.

The premises was used as a post office for more than 150 years before it closed. The village is now being served by a mobile Post Office van which visits Victoria Road twice a week.