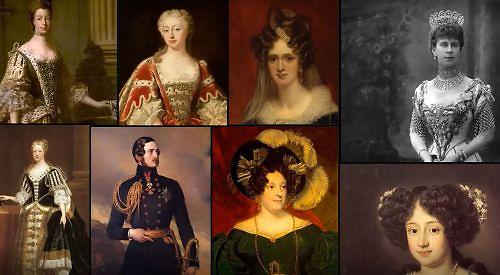 On this occasion, her presentation, via Zoom, was on “Royal weddings”.

Catherine explained that she is an ardent royalist, even though her talk included various accounts of scandal (the past being far more controversial than anything the media might suggest in more recent years).

People normally choose their bride or groom with care, marrying their soul mate or love partner. However, in times past it was rather different for members of royal families.

The choice of a spouse could be on love but factors such as pedigree, religious belief, political and social allegiances, temperament, looks and the ability to breed were more likely to be important.

Health was rarely considered, so royal marriages could involve first and second cousins from around Europe.

Sometimes a spouse would be involved in more than one marriage ceremony, for example, Prince Arthur, who married Catherine of Aragon in 1503.

Two legally binding ceremonies took place using proxies but another wedding took place once Catherine had come to England. When Arthur died, she remained in England and in due course married Henry VIII.

In more recent times, Victoria Mary of Teck was originally engaged to Albert, Duke of Clarence, eldest son of the Prince of Wales, but he died shortly before the wedding was due to take place.

Queen Victoria persuaded her to stay in England for the year of mourning and she then got engaged to Victoria’s second son, Prince George, later George V.

The choice of a suitable partner for a member of the royal family came to be governed by two Acts of Parliament. Under the Royal Settlement Act of 1701, anyone who was a Roman Catholic, or who married one, was no longer allowed to inherit the throne.

This was followed in 1772 by the Royal Marriage Act.

George III was concerned that his brothers were making unsuitable marriage arrangements and this Act required anyone in the line of succession to ask the ruling monarch for permission to marry. In more recent times, that has been amended so that only the top five in line to the throne need seek the monarch’s permission.

Put together, these Acts determined who people in the royal family could marry. Partners would be selected from abroad, so as not to give power to other families in Britain, and tended to come from northern Europe, as that was largely non-Catholic.

Eight out of nine of the next generations had a partner from one of the German states, Germany not being a unified country then. The odd one out was Alexandra of Denmark, who married Edward VII (but her mother was German).

The siblings of the heir to the throne often chose their marriage partner on a similar basis.

Royal mistresses also featured in some of the accounts. It was arranged that Prince George of Hanover, who became George I, would marry Sophia Dorothea of Celle.

George had a mistress, which was considered acceptable at the time for a male in the royal family, while Sophia had a Swedish count as her lover and there were allegations of their having secret meetings.

As a result, George divorced her and in effect put her under house arrest in a castle for the rest of her life. George replaced the soldiers and servants with people loyal to him and she was never able to leave the castle grounds or see her children again.

George then inherited the English crown and brought his mistress Melusine von der Schulenburg with him to England. Although they were not married, she acted as if she were his wife.

George IV was a spendthrift and collector. He was flamboyant and fastidious as the Prince of Wales, and later as Prince Regent.

He looked forward to acceding to the throne and liked everyone to know that. He was not in a hurry to get married but as a bachelor he was spending more than his income. He then worked out that if he had a wife he would receive much more from the royal purse, so he married his mistress, Maria Fitzherbert, without telling his father as she was a Roman Catholic. The marriage was declared illegal and George was single again.

His father, George III, was keen on his niece, Caroline of Brunswick, becoming his daughter-in- law, so sent Lord Malmesbury to prepare the necessary paperwork.

Malmesbury, however, doubted her suitability as she was somewhat indiscrete and a gossip and at public events would lift her skirt to flash her garters at guests.

When she came to England and met George, she said he was not as handsome as in his portrait, while he went to his flat and downed whisky. He recovered sufficiently to go through with the ceremony but then spent the wedding night on the floor in a drunken stupor even though his father had told him he must consummate the marriage.

Their daughter, Princess Charlotte, was the only one of George’s children to be a legitimate heir to the throne but she died in 1817. In 1818, George III told three of his sons that they needed to marry in order to ensure an heir to the throne.

Edward already had a long-term mistress but had not told her he had got engaged only for her to read about it in a newspaper.

William, meanwhile, had had 10 illegitimate children by his long-term mistress.

Although these marriages produced children, only Edward’s daughter, Victoria, survived into adulthood, so she became the heir to the throne as Queen Victoria.

Our speaker then talked about the most popular venues for royal weddings.

Westminster Abbey was first used for the marriage of Henry I to Matilda of Scotland in 1100.

He was one of only two reigning monarchs to marry in the abbey, although at least one royal wedding in every generation from the 1200s onwards has taken place there.

One of those was Edmund, Earl of Lancaster, who in 1269 married Aveline de Forz, who was just 11 at the time and died when she was 15. Later in the century, Margaret Plantagenet married John, Duke of Brabant. Born in 1275, she was betrothed when aged three, although the marriage did not take place until 1290.

The other marriage of a reigning king at the abbey was for Richard II, who was young, good looking and a very eligible partner.

Envoys were sent across Europe to find suitable matches and Anne of Bohemia was mentioned. Richard thought she was too young but after no other suitable match could be found, they were married in 1382. Anne was 15 years old.

The Privy Council was not happy about the marriage contract, not least because she did not have a large dowry to bring with her.

Traditionally, the bridesmaid stood at the bride’s right and would be the next to marry, as several photographs showed.

After the wedding of Prince Albert, Duke of York, in 1923 to Elizabeth Bowes-Lyon, she was not seen carrying a bouquet in the photographs. Bertie had proposed to her three times and she eventually accepted. As she processed down the aisle, one of the clergy fainted and while he was attended to, she took the chance to lay her flowers on the Tomb of the Unknown Warrior (fairly new at the time).

This became another royal wedding tradition, the bride’s flowers being placed there even if the service was held elsewhere.

On one occasion the bride forgot her bouquet so now two are prepared, with one kept at the church as a precaution.

St Paul’s Cathedral has been used only twice for royal weddings. The old cathedral was used in 1503 when Prince Arthur married Catherine of Aragon and the other was for Prince Charles and Diana.

St George’s Chapel at Windsor became popular in the 1700s and 1800s as well as more recently, while the Chapel Royal at St James’s Palace has also been used for such events, notably for Queen Victoria and Prince Albert.

York Minster was used for a royal wedding in 1328 and a truly white one as it was snowing and there was then no roof on the building.

Catherine concluded with a selection of pictures of “scene stealing” by attendants at royal weddings, with pages and bridesmaids looking the wrong way, sticking their tongue out or sharing a joke.

One family wedding where a bridesmaid became the centre of attention was that of Patricia Mountbatten at Romsey Abbey in October 1946.

The royal princesses were bridesmaids but as it was a cold day, they arrived with coats which had to be looked after.

The person assigned to look after Princess Elizabeth’s coat was Lieutenant Philip Mountbatten.

This was captured by the newspaper photographers and it was realised that they were already in a relationship and the couple were married the following year.

To see the society’s full programme of talks, visit
www.wargravehistory.org.uk