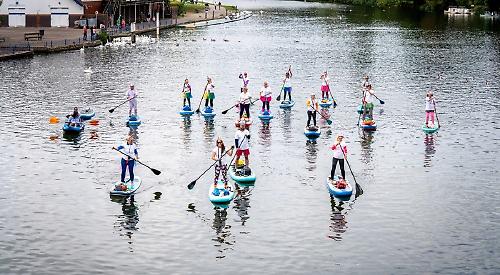 A TEAM of “unicorns” paddleboarded all day on the River Thames to raise money for a girl’s cancer treatment.

Twenty people took part in the fundraiser, travelling downstream from Benson lock to Henley while standing on paddleboards.

They set off at 7am and went through eight locks, including Goring, Whitchurch, Mapledurham, Sonning and Shiplake.

They stopped for a break at the St George & Dragon pub in Wargrave before finishing at about 8.30pm during the final night of the Henley Festival.

The challenge was organised by Victoria Wickins, from Scarletts Lane, near Wargrave, and raised £5,000 for eight-year-old Hollie Beattie, who was diagnosed with neuroblastoma, a rare form of cancer that mostly affects young children, three years ago.

Hollie and her family live in New Zealand but her mother Johanna used to live in Sonning and went to Queen Anne’s School in Caversham with Mrs Wickins.

Mother and daughter have been in Spain since January for Hollie to undergo immunotherapy treatment. Each cycle costs nearly £24,000 and she is likely to need at least eight.

Mrs Wickins, 42, who has three children and works in admin, was joined on the water by her husband Vaughan and friends including David and Emma Paddison, Jo Hall and Emily Harris, who all live in Wargrave. Mr Wickins, who works for the Zacharias Trust, an international Christian charity, wore a tutu and many of the participants wore leg warmers and brightly coloured clothing and unicorn headbands as Hollie loves them.

They also wore specially made
T-shirts, with the phrase “Everything’s going to be okay. Hope for Hollie” printed on the front and a map of the route on the back.

Mrs Wickins said: “Everyone had a moment where they thought, ‘This is going on forever’ but ultimately the friendships and fellowship got us through.

“More than anything, we were all thinking about Hollie. This little girl is going through something we can’t even begin to imagine.

“Twelve hours of stand-up paddleboarding is nothing compared with what she is experiencing on a daily basis.”

As well as accepting online donations before the event, the paddlerboarders collected money on the water by steering towards people on boats and on the towpath.

Mrs Wickins said: “On the river, we think we got about £760 in cash from people who were incredibly generous. Seeing a bunch of crazy colourful unicorns piqued their interest.

“When we got into Wargrave, there was a massive crowd of people at the George & Dragon cheering us on.”

The sun was setting as the paddleboarders arrived in Henley but they had decorated their boards with fairy lights and wore head torches to stay visible.

Mrs Wickins said: “It was so cool to roll into Henley Festival on the last night.

“There was a lady called Theresa who we spoke to and she took our money pot. She started running around the festival site collecting money for us, which was absolutely phenomenal, and that got us another £125.

“It was another indication of people’s kindness and how the story of this little girl has moved people.

“By the time we had finished, there was such a lovely feeling of achievement and I’m so proud of everyone who took part.” Mr Paddison, a fashion accessory wholesaler, wore a unicorn onesie.

He said he was nervous before the challenge but enjoyed it more as time went by.

Mr Paddison, 42, who lives with his wife and their children Grace and Sam, said: “It was more of a mental challenge than physical.

“It was mostly fun. I figured that if it was fancy dress, the least I could do was make an effort given all that little Hollie is going through.

“When we were moving as a group, we got quite a lot of attention and support. People were happy to support the cause and Hollie’s mother is from this area.

“I’ve played about on boards before but this was my first big effort. I’m hopeless normally.”

In April, the Beattie family were told the cancer in Hollie’s bone marrow had relapsed and she had to be removed from a clinical trial.

Mrs Beattie said: “Asking for money is hard, especially after all the support we have received, but we need help to raise this level of funds with our original pot now empty.

“Please help us get Hollie the treatment she needs.”