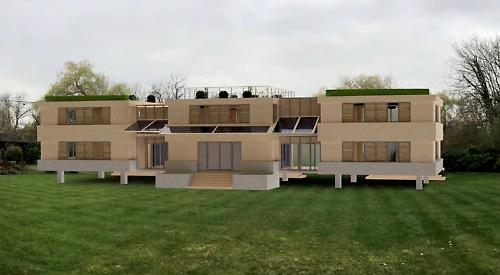 A THIRD attempt is being made to demolish and replace a bungalow in Loddon Drive, Wargrave.

Gavin and Jean Dunbar have lived in the property for more than 25 years but want to replace it with a modern two-storey house with five bedrooms.

They feel that the existing timber-framed house, which overlooks the weir at Shiplake lock, is too small.

The site is in flood zone 3, which puts it at a higher risk than normal, but it is not in the green belt.

The Dunbars withdrew two previous applications to Wokingham Borough Council, the planning authority, after concerns were raised by a neighbour and council officers.

Since the second withdrawal in April, they have made a number of changes to the plans, including the removal of windows, a balcony and a grass-covered roof, which had caused concerns about a loss of privacy and an increase in noise.

The new building would also be constructed from timber instead of concrete cladding.

Neighbour Peter Worden and Wargrave Parish Council, who previously objected, have made no comment in response to the latest application.

A meeting of Wargrave Parish Council, which had also objected, heard that Mr Worden was now happy with the plans.

Architect Nick Rule, who spoke on behalf of the Dunbars, said: “We sat down with Mr and Mrs Worden and had a very useful discussion, reassuring them that there would be no windows overlooking them, and we’ve removed the balcony on that side of the property.”

Previously, Mr Worden opposed the development, saying it would be “intrusive” and the scale was incompatible with the location.

He was also frustrated at the lack of consultation he had received.

Mr Rule added: “The original scheme had a number of mixed indoor and outdoor spaces which tended to increase the bulk of the property.

“In discussion with planning officers, it was thought it would be better to reduce the overall volume. Mr and Mrs Dunbar have been very keen to try to steer towards timber with a shallow pitched roof.”

He added that an escape gangway from the building out to Loddon Drive, which was requested by the flooding and drainage officer, had been removed.

Mr Rule said: “Mr Worden objected to that, as did we. If you end up in Loddon Drive, it doesn’t help with flood conditions. That’s under discussion with the officer but there is no benefit to the gangway and nobody else in the area has one.

“Having lived there for 25 years, Mr and Mrs Dunbar are quite used to paddling out if they need to escape from their property.”

He said concerns had also been raised about visibility of the house from the Thames Path to the south-west, adding: “We were surprised and have submitted photographs, which show there is no sign of the building over the weir.”

The parish council had claimed the new house would reduce the privacy of neighbours and create additional noise.

Parish clerk Stephen Hedges said the new scheme was much more acceptable and that each time the Dunbars had withdrawn the application they had sought to address the concerns raised.

“It does appear that all the concerns we raised on the previous two submissions have been addressed,” he said. “While it is a volume increase of 59 per cent, the footprint increase is not that much and it is not in the green belt.

“The design is substantially different to the first application. The use of a low-profile roof does appear to minimise the impact on height and bulk.”

A design statement, submitted to the borough council by FDF Architecture of Crazies Hill, says: “The previous application was not supported because it was felt that the increase in built volume of the new house exceeded other recently consented proposals.

“In addition, the choice of materials added to the prominence on the site. The architects have made appropriate changes to both these aspects.

“The footprint of the new house is derived from the requirement to maximise the river views from within the building and its terraced external spaces.”