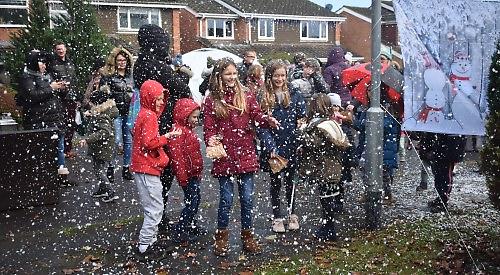 Showtime: a Christmas street party was held in Wargrave to raise money for specialist treatment for a little girl with cerebral palsy.

About 250 people attended the event in The Copse, where Isla Pearce, three, lives with her parents, Richard and Debbie. Isla, who suffered a hypoxic incident at birth, has quadriplegic cerebral palsy, which affects all her motor skills and she is not yet able to sit, crawl, roll or walk unaided. Her ability to speak and swallow are also affected.

Neighbours and friends set up stalls in the road selling cards, home-made jewellery, candles, wreaths and decorations as well as wool hats and scarves made by Isla’s grandmother in Scotland. A hog roast was provided by Roy Maslin, owner of Spitting Pig Berkshire.

The Wargrave Community Choir sang carols and Father Christmas visited amid artificial snow. The party raised more than £6,000, which will go towards intensive therapy treatment for Isla at the NAPA Center in Denver, Colorado. She and her family have to visit the world-renowned centre twice a year for three weeks at a time.

Ms Lang, 45, said: “The treatment that Isla has been accepted for will begin in the spring. The intensive therapy she has had really increased her strength, helping her core and head control, which helps her to use her hands. It also helped with her communication skills, which is so important as Isla has a lot to say. My daughter is a very happy, sociable, smiley little girl with a great sense of humour. She absolutely loves being in her swing, walking in her walking frame and being with other children and animals.”

Pictured, clockwise from top left, Genevieve Reynolds-Kasprzyk spraying fake snow at the children, Ms Lang and Isla with Father Christmas and his elf Quinn Bookless, an advertisement for the party and Sophie Simmons, 10, and Suzie Scofield selling wreaths.