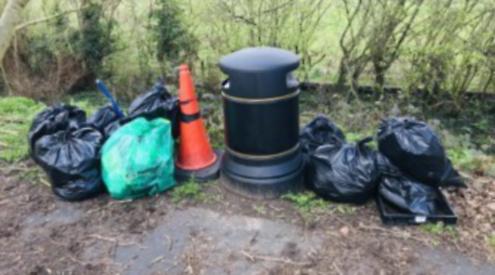 A SYRINGE was among the items picked up by volunteers in Charvil.

Eight residents spent an hour collecting 10 bagfulsl of rubbish, including building waste, old bottles and food packaging, from the layby along the A4 between Charvil and Sonning.

The litter-pick was organised by Sam Akhtar, founder of community group Charvil Matters, which was set up in 2019 to keep the village clean. He has since become a Wokingham borough councillor. Councillor Akhtar, 31, who lives in Pound Lane with his partner Tasmin Morgan, said: “The most concerning find was the syringe. I was shocked when I found it and I have safely disposed of it.

“There was also a large amount of fly-tipped building waste on the A4 which I have reported to the borough council to pick up.

“I would like to thank all our volunteers who keep coming out to support the group and we look forward to another session soon.”