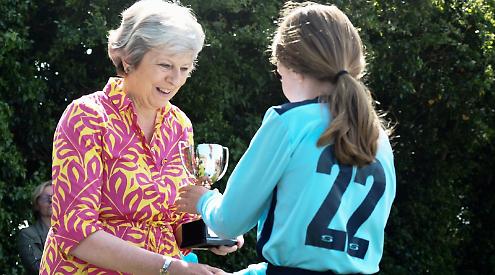 SCORES of girls and their families attended an awards ceremony to mark the end of Wargrave Women and Girls’ Football Club’s season.

Maidenhead MP Theresa May, who is the club’s president, presented the prizes.

The event at the recreation ground began with a mini football tournament followed by the annual meeting where an overview of the season was presented by club chairman Bob Austen.

He said: “To see so many smiling faces was a real joy and I hope that everyone enjoyed the morning as much as I did. It’s with great thanks to everyone for organising. Great teamwork all round.”

Mark Usher, lead coach of the under-11s Cobras side, said: “It is great to see so many girls taking part in competitive sport, particularly football. It can be quite difficult to keep girls motivated as they get older but here they experience friendships, camaraderie nd teamwork.

“Back in my day there were very few female footballers but now it is not a token sport, these girls genuinely love the game and love playing it.” Mr Usher, who lives in Charvil and whose daughter Bella is goalkeeper for his side, added: “Mrs May has been involved with the club for a long time and the awards are something that we all look forward to.”

The awards for players’ player, coaches’ player and most improved player of the year were as follows (in order):

U9 Wildcats — medals for all