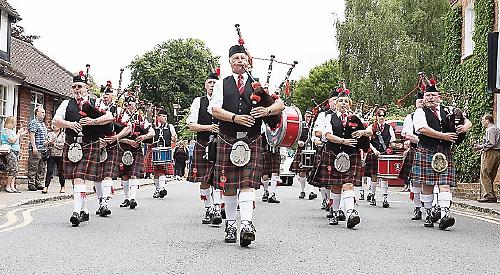 THE chairwoman of what is expected to be the most successful Wargrave Festival to date disagrees with a suggestion for the event to be held every three years.

This year’s 19-day festival returned last month after a two-year absence due to the coronavirus pandemic and the programme of music, theatre, art and culture saw many events sell out in advance due to pent-up demand as villagers embraced the chance to socialise after lockdown.

This success has led to a call for the festival, held biannually since 1975, to be run every three years. A not-for-profit event, all proceeds go to community organisations which offer education, sport and culture to villagers.

Kate Emerton posed the question in the village newsletter, Wargrave News, of whether the longer break should be permanent.

She said: “I think many people felt a longer gap than usual contributed to our enjoyment, so perhaps we could consider holding the festival every three years rather than two? That would give everyone who works so hard time to recover before the next one, which I’m sure is already well in the planning stage.

“We are also fortunate to live in an area where music festivals, fetes, boat rallies and beautiful gardens abound and this would give people more opportunity to attend some of these, as well as participating in our own festival.”

Festival chairwoman Cath Forsaith said this week the suggestion would be considered by the organising committee but felt the two-year cycle should remain because of the fundraising benefits it offered community organisations.

She said: “Organising individual festival events is split between the festival committee and various village groups and societies, such as school parent teacher associations. Proceeds from committee-organised events, such as the Bohemian Ball and quiz night, cover costs such as marquee hire, publicity and marketing, while community organisations that organise events under the banner of the festival keep the lion’s share of the money they raise.

“Moving the festival to every three years would impact on these organisations’ ability to stage their events. These make a massive contribution to their funds that they would not be able to fundraise without the support of the festival’s infrastructure, such as promotion and using the marquee for the comedy night.

“They know they can have a great big fundraising event every two years. The two-year cycle gives these organisations certainty. Changing it could have a big impact on their fundraising.”

Ms Forsaith believes providing this support is one of the secrets of the success of the festival as it encourages village organisations to get involved, which in turn helps build participation from the community, particularly among children.

The theme of this year’s festival was “Summer of Love” to reflect how villagers looked after each other during the pandemic.

Final figures for attendance and money raised will not be available until the autumn but Ms Forsaith believes it has the potential to be the most successful festival yet.

She said: “From a community support perspective it was the best one we have had, and I’ve had a lot of feedback from across the village to that effect. I think the reason was because of the last three years we have had to endure. I think people were ready to come out and socialise after covid.”

This year saw several successful new events and initiatives including the Pub on the Green, Bikefest and the literary festival. The use of card readers instead of cash also worked well as did online ticket sales.

Planning the 2024 Wargrave festival is due to start in about March next year and Ms Forsaith will remain as chairwoman.