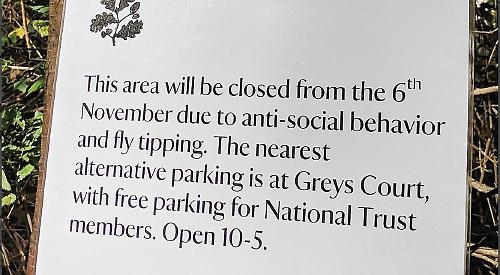 A CAR parking area used by dog walkers to access woods near Henley is to be closed to the public due to fly-tipping and antisocial behaviour.

The National Trust, which owns the clearing as it is part of the Greys Court Estate, said there had also been security issues and damage to tree roots.

But people who use it say the trust, which is a charity, is depriving the vast majority of well-behaved nature lovers of an important facility.

The parking area, which is off a rural road known locally as “Broadplat Lane” and has room for about 12 cars, has been used by walkers for decades. It allows access to the woods on the estate as well as to Lambridge Woods on the other side of the lane.

It will be closed to the public from Monday. A warning sign was put up in the area last week, saying that alternative parking was available at Greys Court but this is half a mile away and free only to trust members.

Rob Hayes, general manager of Greys Court, said the land had never been officially designated as a car park.

He said: “We’re closing a clearing in the woods on the Bix road to car parking for a number of reasons.

“These include complaints from local residents and landowners about antisocial behaviour in the evenings, vans parking overnight and fly-tipping.

“There have also been allegations of trespass and disturbance to livestock and that the clearing is being used as a base for deer poaching on neighbouring estates.

“The clearing was never an officially designated car park and there is a safety issue in that the trees are surveyed as part of the estate rather than to public car park standards. There would be a significant cost to the charity to increase tree safety vigilance.

“There is also increasing evidence of damage to tree roots by the weight of cars. Removing cars will allow the area to revert to native British woodland.

“Closing the clearing to car parking is part of a process to restore the traditional boundary of Greys Court and keep the estate secure when the property is closed.

“The car park at Greys Court is 10 minutes’ walk away. National Trust members can park here for free and every membership card scanned helps to look after this special place.”

Ginny Batchelor-Smith, from Lower Assendon, said: “The car park has always been there. People tend to go there, park for an hour to walk their dog and then go away peacefully. It is commonly used by everybody.”

She said she had seen fly-tipping in the area but it was no worse than in other areas and the dog walkers and others who used the land cleaned it up regularly.

Mrs Batchelor-Smith said: “To deprive us of its use is to pour blame on those who are, in general, the most responsible guardians of the area.

“We don’t fly-tip and many of us collect any drinks tins and fag packets we find, taking them home to be recycled in the usual way.

“Litter attracts more litter, so to remove what is dropped reduces the problem.  As to fly-tipping, yes, it does happen in the car park from time to time but this is an endemic problem everywhere and, by closing off this area, rubbish will simply be dumped elsewhere in the woods.”

Mrs Batchelor-Smith said the car park at Greys Court was not a proper alternative and not everyone was a menber of the trust.

“It is only available between 10am and 5pm,” she said. “A lot of people go walking earlier than 10am or go for an evening walk, especially in the summer when the days are longer.

“The car park is a good place to start walking but the house is not.

“The lane is narrow and if there are two cars using it you have to go up on to the steep banks. These are not suitable for parking, although in recent months I have seen people going on to the banks in their 4x4s to park.”

Graham Wheal, from Wargrave, said he was not aware of any antisocial behaviour.

He said: “Their sign states that it is due to fly-tipping and antisocial behaviour. In many years of parking there I have seen evidence of the former but never the latter.

“This parking area is used primarily by dog walkers with many being of advanced years.

“It is convenient and keeps cars safely off the verges along Broadplat lane.”