Time for war on litter in country, says dog walker 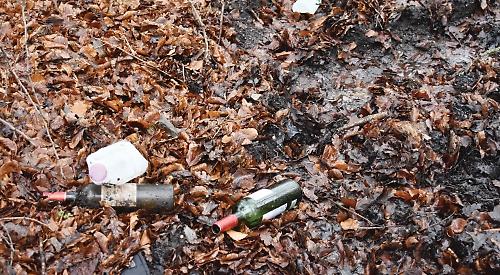 A MAN has called for a “war on litter” to take place after clearing up tons of rubbish along the roadside near his home.

Johnny Grimond, 71, says rubbish is a national problem that should be tackled by the Government, councils and schools with the support of the rest of us.

He blames thoughtless people who don’t use waste bins as well as takeaway food and drink sellers for using packaging containing plastic.

Mr Grimond, from Highmoor, walks his black Labrador Puffin along a section of the A4130, the main road between Nettlebed and Henley, almost every day and says he picks up litter including takeaway cups, cans and plastic and glass and bottles. Most of it is non-biodegradable.

He said: “I walk several times a week along that bit of the road. It’s only maybe 100m but I usually have some kind of bag with me and I never come back empty-handed if I have a bag.

“There’s usually something to pick up and often several items, mostly plastic.

“Just about anything can turn up — after Christmas people dump decorations. There are also wine bottles which have nearly always shattered into small pieces.”

Mr Grimond, who is retired, said he wanted more done by the authorities to tackle the problem. He said: “I’m sure it’s a national problem. The roads are covered with litter and you see the same preparediness to chuck litter out all over the country.

“There should be a campaign at schools explaining to children that rubbish should be taken home, not just thrown down in the street or roadside.

“Parents should be asked to make sure children don’t do it and a culture of taking it to the bin should be the norm.

“South Oxfordshire District Council should do its part by picking up litter rather than letting it accumulate should prosecute using CCTV cameras.

“They could put up signs saying CCTV is operating even if it is not, just to deter people. They should also prosecute more people to show there are penalties for dropping litter. There’s a need for a war on litter to make people realise that it’s not a civic-minded thing to do to drop it wherever you want. I’m sure there would be a lot of support for that.”

Mr Grimond said his most common litter finds were the takeaway coffee cups from the Waitrose store in Henley, which are thrown from cars on to the roadside.

This was down to the company’s loyalty scheme whereby customers with a myWaitrose card are offered a free tea or coffee when shopping at the store.

Mr Grimond said: “I found I was picking up Waitrose coffee cups more than any other single item of litter but there were plenty of others too, including Costa, McDonald’s and KFC.

“People take the coffee away and then many of them chuck the cup out of the car window. I did draw the attention of Waitrose to it. I had two sacks full of used coffee cups, which I emptied into a trolley and presented to the manager.

“He was a very obliging guy and didn’t take offence. He said it was shocking but he was powerless to change the policy of giving away coffee.”

He said: “There have been issues in the lay-by between Nettlebed and Nuffield before and I’ve asked [the council’s contractor] Biffa to keep an eye on it.

“If there’s a problem with litter on a regular basis we will have to look at ways of dealing with it.

“That area of road is inappropriate for mobile cameras as they are unlikely to pick up who is dropping the litter.”

A Waitrose spokeswoman said: “A free tea or coffee is one of the ways we thank our customers for shopping with us.

“We always encourage our customers to dispose of their cups properly, either using the bins provided inside and outside our shop, or elsewhere.

“We also have reusable coffee cups available for our customers to purchase.”