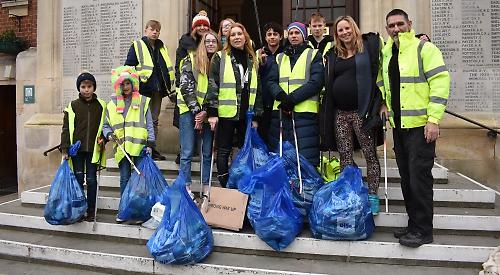 Volunteers helped clear up waste including flip-flops, computer parts and even used nappies from parks and streets in Henley.

More than 20 people spent about two hours walking around the town with bin bags and litter pickers on Thursday last week (3).

They were split in to two smaller groups, one of which patrolled streets in the town centre while the other visited Mill Meadows and parts of the River Thames towpath.

They managed to fill about 10 bin bags with rubbish they had picked up, with the most common items including plastic bottles and cigarette butts.

The event was organised by anti-plastic campaigner Julia Carey and interior designer Lynne Lambourne to raise awareness of waste in the town.

The bin liners and pickers, as well as reflective vests, were provided by South Oxfordshire District Council, with the bags of rubbish due to be collected by the council’s contractor Biffa earlier this week.

Mrs Carey, who took part in the litter pick despite being nine months pregnant, said: “Lynne and I got together and organised it and we will definitely be doing more throughout the year.

“I’m very pleased with the turnout, it’s definitely worth it for an hour of our time. It’s great to have lots of young people as well.

“We did Greys Road and Kings Road car parks, Mill Lane, New Street, the River and Rowing Museum and along the river.

“Lynne took some down to the park and I stuck around the town centre with a few others.

“The cigarettes are just crazy. We need to think of something to do to keep people from doing it. We need to tackle that.”

Ms Lambourne added: “We thought it would be a nice chance for the caring people of the community to get together and do a litter pick, which is quite sociable.

“We went down to Mill Meadows and the River and Rowing Museum and there was an alarming amount of litter.

“The undergrowth has recently been cut back and revealed lots of disposable barbecues, plastic bottles, wine bottles and all sorts of stuff.”

Ms Lambourne says some of the items uncovered at Mill Meadows included balls, belts, Frisbees and plastic toys which may have been discarded during the summer but only revealed now.

Some of these were collected in a separate bag and will now be used to make pieces of art by her Warriors on Waste children’s club.

The club runs bootcamps for youngsters and teaches them about upcycling, which involves turning waste or unwanted products into newer, better or more eco-friendly items.

Ms Lambourne said: “Lots of my children in the club have been on about organising a litter pick and it’s nice for them to see what I keep talking about with plastic bottles in the river and ditches.

“We kept the weirder pieces and we are going to make a piece of artwork each time with the things we collect.

“Gradually people will learn that it’s a fun activity and also an educational thing for the kids.”

Mrs Carey, who lives in Reading Road and runs her own jewellery business, has always had an interest in environmental issues and regularly organised clean-ups in Dover when she was living there as a teenager.

Last year she launched petitions calling for the town’s supermarkets to use less plastic packaging.

More than 1,500 people signed the petitions asking Tesco in Reading Road and Waitrose in Bell Street to introduce a plastic-free aisle for fresh produce like fruit or vegetables so people can take it away in their own bags or baskets.

Mrs Carey is also working with the Henley Festival to reduce the amount of single-use plastic at the annual music and arts event.

Last week, the Henley Standard revealed that the festival would be bringing in fully recyclable plastic glasses at this year’s event, which will take place from July 10 to 14.