Pick up after your dog and put it in bin, says schoolgirl 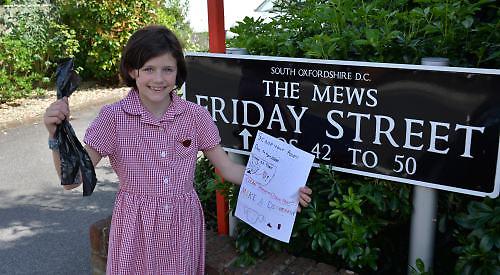 A GIRL has launched a campaign to rid Henley of dog muck, writes Luke Adams.

Poppy Feeney, 10, who lives in the town centre, has created posters which she hopes will encourage walkers to pick up after their pets and dispose of it properly.

She was out with her family in and around the town a few months ago and counted 49 full dog poo bags that had been left on the ground instead of being put into bins.

Poppy, who is a pupil at Badgemore Primary School, was so disappointed that she wrote to the then Mayor of Henley.

She said: “It [dog fouling] is really disgusting and it is dirty. It also makes Henley look unpleasant. I have lots of friends at school who are interested in helping out. It is even more annoying when there are bins to use.”

Dog faeces carries diseases that can affect humans, such as toxocariasis, which can lead to blindness. Anyone who is caught dog fouling can be fined £80.

Poppy was invited to a meeting of the town council’s open and green spaces sub-committee where members discussed her complaint.

Councillor Kellie Hinton, who chairs the committee, said: “I have been sent a video by a resident living on Friday Street of a lady walking her dog and she waited until the dog had finished his business and she just walked away. This was right outside someone’s house.

“It is important that we can hold these people to account in some way, because it is so unhygienic. We are, however, fortunate to have so many residents who want to do good and make Henley a better place to live.”

Councillors heard how dog waste bags were often being left in the fields and woods around Henley.

Cllr Hinton added: “I think it is really wonderful that Poppy felt she was able to approach the town council. I think it is particularly special when young people step forward and say this is not okay.

“Some of the problem areas are not in our boundaries, but are in Remenham Parish Council’s. A lot of the issues in Poppy’s letter have been resolved on that side, thanks to the installation of bins. We have had issues in Henley for a long time. Because the town council has contributed towards police community support officers, we have been able to ask for assistance in this area.”

Poppy was thanked by the committee for bringing the problem to the council’s attention and the committee agreed to provide some funds for marketing her posters. Councillors Hinton and her deputy Laurence Plant will also meet with Poppy to discuss her ideas.