Residents' fury as rubbish piled up 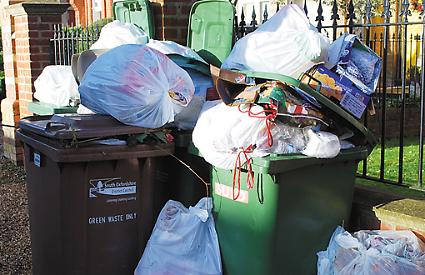 RUBBISH was left to pile up on a Henley street after binmen failed to collect it during Christmas and New Year.

Recycling and food waste was scheduled to be collected from Norman Avenue on Friday, December 27 but was not picked up until six days later.

Despite numerous complaints to South Oxfordshire District Council, residents were forced to put up with piles of rubbish outside their homes, some of it up to two weeks old.

Lisa Drage, 46, who lives in Norman Avenue with her husband Chris, 56, and children Frances, 21, Alexander, 18, and Benjamin, 14, said: The recycling wasnt too bad  the worst thing was the food rubbish from Christmas.

The bags were starting to be ripped open, Im guessing by dogs or foxes. Henley has a rat problem too so it wasnt great.

The bins are normally picked up by Biffa, the councils contractor, on Wednesdays but the collection was rescheduled to Friday during the Christmas holiday. In the end, the rubbish was not collected until Thursday last week, almost a week late  despite several phone calls to the council.

Mrs Drage said: I phoned the council at the beginning of the week and they said they would come as soon as possible. I thought that would be before New Years Day but it wasnt.

Some of my neighbours also complained so I know the council were aware of it but they didnt do anything. I was expecting them to collect the food if nothing else. Its really not good at all.

Neighbour Clare Dodds emailed the council three times to make it aware that the rubbish had not been collected and to ask when it would be removed.

She said: Each time they said, we are sorry and well sort it out and come in the next day or two to get it but it took them a long time to sort it. They werent impolite but they didnt do what they were supposed to do and it was the worst collection to miss because of everybodys Christmas waste.

Mrs Dodds said that many households had filled their rubbish bins and were forced to pile plastic bin bags around them.

Lots of people had five or six food bags piled on top of each other, she said. Residents were told to leave their stuff out so everybody did and it was just piling up. We were lucky because we have two food bin containers and we had been away but everybody else had all their Christmas food and all the rest of it.

Alan Popham, who also lives in the street, said he had to clear up rubbish which foxes had rifled through.

They went for some of the plastic rubbish bags so waste was spilled in the street and we had to pick that up, he said. It is not healthy and is unpleasant.

His wife, Pat, said: We had quite a few rubbish bags but we managed to mostly pile it on top of the plastic bin but other people in the street had a lot more. It was lucky that we didnt have such a busy Christmas because then it would have been a problem.

Fellow resident Jo Saunders said that an irregular collection service was to be expected during the holiday period.

The binmen deserve a Christmas just like everybody else, she said. It is not very pretty to have rubbish in the street but you have to accept that things close down for Christmas.

Neighbour Michael Redley said: They collected the rubbish later than they said they would but Christmas is always a bit strange and it is not a big issue.

It wasnt a problem for us, although the rubbish did pile up because there was an awful lot of wrapping paper.

A spokeswoman for South Oxfordshire District Council said: We have liaised with Biffa regarding reported issues with recycling and food collections in Henley on December 27.

Collection crews have revisited the Norman Avenue area to pick up any presented bins.