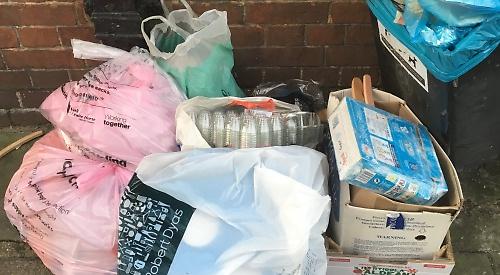 THE streets of Henley were strewn with rubbish after the public litter bins were not emptied over the weekend.

Bins in the town centre were filled during Saturday and Sunday so that by lunchtime on Monday they were overflowing and waste was being blown about.

The problem has been blamed on staff illness.

Takeaway coffee cups, fizzy drinks cans and takeaway boxes were sticking out of bins or were placed on top and around them while cigarette butts and chewing gum littered the pavements.

To add to the problem, bags of household waste had been dumped beside the bins and at the end of some streets.

A discarded coffee cup, cigarette butts and a box of eggs had been thrown into a planter in Duke Street. Waste contractor Biffa, which has a contract with Henley Town Council and South Oxfordshire District Council to empty the bins regularly, has apologised.

Deputy Mayor David Eggleton said he was “disappointed” that the bins had not been emptied and that it was down to a rubbish collector being unwell.

He said: “I was out from 7am on Monday and every bin was overflowing with rubbish.

“There is normally someone on at the weekends who empties the bins but from what I know, there was no one out because the person down to do it was ill.

“These things happen but work shouldn’t come to a grinding halt just because someone is ill.

“There should be a procedure in place where someone else is called in to do the work or, if that’s not possible, Biffa should have sent two people to the town on Monday to get it all sorted.”

He added: “I am a bit disappointed but it would be a lot worse in summer time with all the events we have and with more people out, but this shouldn’t happen at any time of year.”

Councillor Stefan Gawrysiak, who is a member of the town and district councils, said: “I was made aware of this by a resident who is normally on my case with regards to litter. I contacted Biffa and the district council.”

Town clerk Sheridan Jacklin-Edward said: “Even if it’s down to illness that shouldn’t matter. If they have a contract, they should be making sure it is fulfilled. Waste, recycling and the environment is something that the town council is really committed to in making sure Henley is as clean and attractive as possible.

“This council puts so much work into other areas, such as hanging baskets and bunting, and we want to work with Biffa and the district council in making the town as good as possible.”

He said he would be carrying out a review of the council’s cleaning commitments, such as street cleaning and gutter clearing.

In a statement, Biffa said: “We apologise for any inconvenience caused to the local residents in
Henley. Our crews have worked hard to clear up the situation and we’re pleased to confirm the issue has now been resolved.”

A district council spokeswoman said: “We apologise for the overflowing bins in Henley town centre during last weekend.

“Unfortunately, the person due to empty the bins was unwell and neglected to inform his supervisor.

“As soon as Biffa was made aware of the situation, they sent a team to empty them.”

Last week, the Henley Standard reported that a bin on the corner of Reading Road and Upton Close, which regularly overflows, is to be replaced.