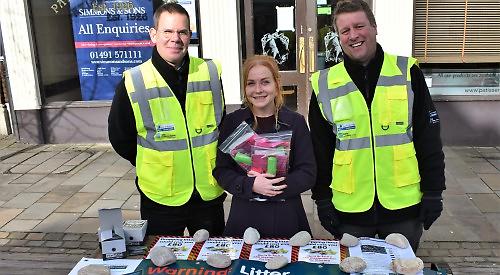 A CRACKDOWN on littering is to be carried out in Henley.

South Oxfordshire District Council, which is responsible for street cleaning, is to increase the number of patrols carried out by its enforcement officers in the town centre.

The four-strong team, who wear uniforms and high-viz jackets, can hand out an £80 fine on the spot to anyone seen dropping rubbish. They will target all forms of littering but particularly want to reduce the amount of discarded chewing gum and cigarette butts.

On Thursday last week members of the team set up a stall in Market Place and gave out free portable ashtrays as well as information packs and bin liners to use in household food caddies. Waste and recycling officer Jessica Beare said: “The patrols are not new but we’re taking a more active approach in Henley and the other market towns.

“People aren’t aware of the problems caused by cigarette butts or gum but they need to appreciate that all litter is litter and should always be disposed of appropriately.”