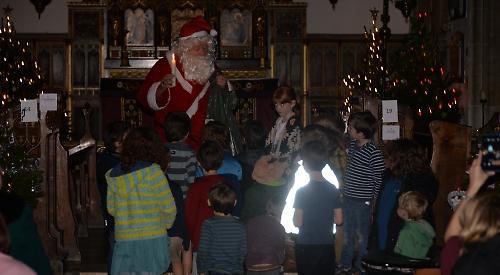 LET there be music is the theme of this year’s Watlington Christmas Tree Festival, which began on Saturday.

About 100 people were at St Leonard’s Church to watch Father Christmas switch on the lights of the 35 decorated trees.

They sang carols including O Little Town of Bethlehem, Away in a Manger and Hark! The Herald Angels Sing before associate priest Angie Paterson introduced the special visitor who then led the countdown with children.

The trees have been decorated by families, community groups and businesses including the children’s centre, the Friends of Watlington Library, Watlington Cricket Club, the Chequers pub, chocolate shop Tutu Delicious, the Royal British Legion and Watlington in Bloom. A Beatles-themed tree decorated by the Morrison family featured the titles of their hits and cardboard cut-outs of a yellow submarine and a strawberry in tribute to Strawberry Fields Forever.

The Friends of Watlington Library made decorations from the pages of old books and called their tree Paperback Writer.

Residents of Lilac Place decorated their tree with about 100 knitted bumblebees and called it Flight of the Bumblebee.

The Watlington brownies paid tribute to the Jungle Book by making snakes out of old ties.

The event is organised by the Friends of St Leonard’s and the trees were supplied by the Tree Barn in Christmas Common. Janet Vaughan, who chairs the Friends group, said: “It’s magical to see the church looking really beautiful and festive with all the lights.

“There are trees from the pre-school children right up to the most senior members of Watlington and a lot of effort has obviously been put into the planning. They are all wonderful in their own way.”

The eighth annual festival will run until December 21 daily from 2pm to 5pm.

All donations will go towards the restoration of the stonework of the church tower.

Mrs Vaughan estimated that as much as £400 had been raised during the opening weekend.