Residents angry at plan for 'oversized' house in village 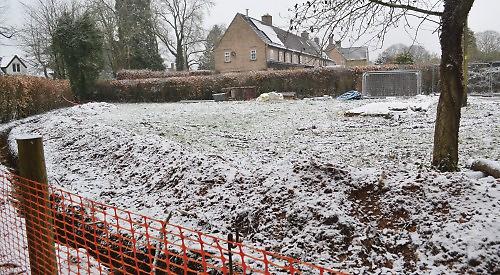 A VILLAGE has been thrown back into turmoil over new plans to develop land that residents wanted kept as community space.

Search and Management Services has applied for planning permission to build a four-bedroom house on the plot, known as Old Church, having already been given consent for a three-bedroom property following an appeal.

Villagers had wanted the former Forestry Commission land to be registered as an asset of community value and more than 120 residents signed a petition objecting to the original application.

They argued that there were covenants on the land stating it should be for community use only.

Now residents have relaunched their campaign in protest at the revised scheme for the land to the east of the main road between No 1 Forestry Cottages to the north and The Old Church to the south.

Neighbour Howard Griffiths said: “Our property lies directly opposite the proposed development. We did not support the original planning scheme, nor did we object to it.

“However, we do object in the strongest possible terms to the latest planning application. The proposed scheme is unneighbourly, oversized for the plot and out of character with the surrounding properties.

“We also have serious concerns regarding the hedging and the trees surrounding the site.

“A trench has been dug in order to lay power cables and this has been left open for several weeks, leaving the beech hedge roots, and possibly other tree roots, exposed to the elements.

“Further work is to be carried out to reposition electricity poles and it is difficult to imagine how this can be done without further damaging the trees which the planners have stated should be retained to screen the site from the road.

“On this occasion it is hoped that the planning department will have regard for the well-researched and carefully considered issues raised and the heartfelt objections of local residents and others and refuse permission for this planning application.”

Richard Glover, who lives at Forestry Cottages, immediately adjacent to the site, claimed his home would be overshadowed by the “oppressive dominance and bulk” of the new house.

Villager Sylvia Mountford said: “If small, seemingly insignificant areas of former forestry land are granted building permission, the floodgates are opened for the relentless erosion of these precious areas. They are designated for a reason. When they’re gone, they’re gone and our children and future generations will never enjoy the wellbeing such areas bring.”

Robert Barber said: “The present leafy rural aspect when heading into the woods would be significantly more impacted by this new proposal than the approved scheme.”

Angela Jacob, of Sycamore Close, Watlington, said: “This little piece of open space must be preserved at all costs for everybody now and in the future and not sacrificed for one house.”

Jennifer Fellner, from Cookley Green, said it was a great shame that the village was in turmoil again. She said there were four covenants on the land forbidding any building on it.

The Campaign to Protect Rural England and Watlington Parish Council have both objected to the application.

The CPRE said the footprint of the four-bedroom house would be “considerably larger” than the one previously approved and would encroach on the important boundary with the Oxfordshire Way.

It said: “The double garage, absent from the previous application, will back right on to the 15m ancient woodland buffer zone and during the construction of this building there will inevitably be intrusion into the zone.

“The proposed large house and garage are inappropriate overdevelopment of this site and will be damaging to the landscape.”

The parish council said the house would harm the setting of Christmas Common and the Chilterns Area of Outstanding Natural Beauty and would be overdevelopment.

The company’s appeal against the original application was heard by planning inspector Elizabeth Pleasant.

She said: “The main issue in this case is the effect on the landscape setting of Christmas Common and landscape qualities of the Chilterns Area of Outstanding Natural Beauty, with particular regard to siting and appearance.

“Although the introduction of a built form on to the site would alter its appearance, the design and appearance of the proposed dwelling, including its overall mass, height and use of materials, would reflect both the scale of neighbouring properties and the local vernacular.

“I do not, therefore, consider that its appearance would be incongruous or obtrusive in this location and I believe the overall appearance of the site would be improved.”

Mrs Pleasant said she had taken the impact on neighbouring trees and woodland into consideration, adding: “The [district] council did not raise any objection on these grounds and no specific objections have been received from Natural England or statutory consultees.”

The land was sold by the Forestry Commission in 2011 after being advertised to only the residents of the houses that were built by the commission in 1952.

South Oxfordshire District Council will make a decision by March 2.