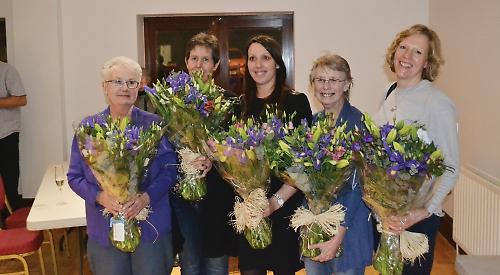 A FAREWELL party was held for staff as Watlington’s post office relocated.

The High Street business closed at noon on Saturday and re-opened at its new premises inside the Midcounties Co-operative store in nearby Couching Street on Monday.

The party was held at the Watlington Club on Friday evening and was attended by about 60 people.

Mrs Jackson told guests: “I have to thank the team. Like a jigsaw, it would not have worked without each other.

“I would also like to thank Watlington because it works both ways. You guys have been great to us.

“We would like to thank everybody who has come in over all the years it has been there and for the generous donations and gifts we have been given. We’re sad to be leaving.”

Gill Bindoff, who helped organise the party, said: “Everybody thinks the post office is fantastic and is sorry they’re going. This is a way for the community in Watlington to thank the staff for the fantastic job they have done over the years and to wish them well in the future. The post office is a Watlington institution so we are sorry to see it go.”

The Post Office announced the decision to move the branch in November following a public consultation exercise.

It says the new post office is a “local”-style branch with much longer opening hours. Post office services are available from two open-plan tills at the shop counter from Monday to Sunday, 6am to 11pm. That is a total of 119 hours a week, 73 more than previously.

The Post Office said the earlier opening and later closing was designed to make it more convenient for customers.

There is also level access with a wide automatic door whereas the old branch had a step.

The relocation is part of a modernisation programme across the Post Office network.