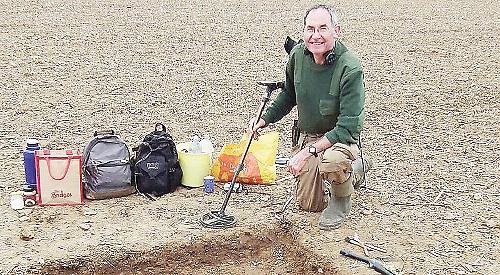 A MAN who found a £1.35 million treasure trove in Watlington is to return to the town to give a talk about it.

The hoard has since been bought by the Ashmolean Museum in Oxford.

Mr Mather and Dr Gareth Williams, from the British Museum, will give a talk about the treasure at Icknield Community College on May 5 at 7.30pm.

The event will be raising money for the purchase of a replica set of the hoard to be put on public display.

The Ashmolean received more than
£1 million from the Heritage Lottery Fund and raised the rest of the money with a public appeal.

More than 800 donations were made, including more than 50 from people or organisations in the Watlington area totalling £4,820.77. The parish council gave £500.

Parish councillor Terry Jackson said: “We were incredibly touched by the response from Watlington residents.

“We hope that they will go and see the hoard — if they haven’t already — when it goes back on display at the Ashmolean in late March.

“They will also be able to take part in events and activities around the hoard being organised at the Ashmolean and in the Watlington area.”

Tickets for the talk cost £10, or £4 for students, and are available from the parish office and Watlington library. There will be an interval with wine and refreshments available to buy.

The event is supported by the parish council and the Friends of Watlington Library.