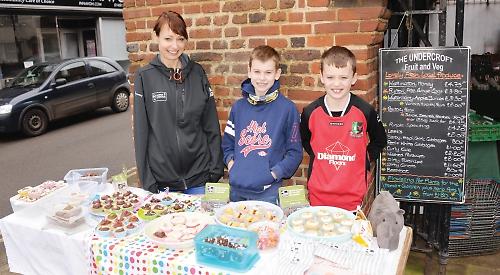 A WOMAN from Watlington is to run the London Marathon for the third time in aid of Save the Rhino.

Liz Winton is to tackle the
26.2-mile course on April 23 dressed in a rhino costume which weighs around 10 kilos.

The 43-year-old childminder said: “It’s going to be a massive challenge. I am training in a rhino onesie and a weighted vest so I can get used to carrying the extra weight.

“The suit is quite uncomfortable, you’re not able to see very well and because it’s big, you have to start right at the back with all the people dressed as fire hydrants and phone boxes.”

The former Watlington parish councillor, who also took part in the event in 2014 and 2016 for the same charity, has already raised almost £4,000.

She raised £500 at a cake sale and “beauty de-clutter” in the undercroft at Watlington town hall where people could buy unused products including make-up, skincare and bath products which had been donated. She was helped by her sons Robert, 12, Ollie, 10, husband Andrew and friend Amanda Burton and made most of the cakes herself.

Mrs Winton said: “The sale went really well. People were very generous and actually a lot of people knew the plight of the rhino and wanted to give to the cause.

“It’s just awful what is happening. We want our children to grow up in a world where animals are living in the wild and not in zoos. Rhinos are just magnificent animals, I love them.”

She has also received the support of celebrities including retired footballer Jamie Redknapp, former athlete Kriss Akabusi and pop singer Olly Murs who have made videos encouraging people to support her.

Mrs Winton said: “It has been amazing. I’m overwhelmed really.”