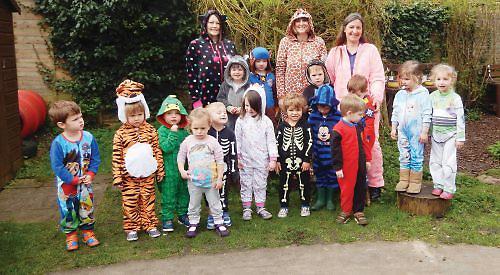 CHILDREN in Watlington learned about autism and raised more than £600 for charity in the process.

They were encouraged to help by Kate Quarterman, whose 11-year-old son Shayne, 11, who attends the primary school, has autism.

The primary school and college both held cake sales.

The primary also organised a non-uniform day to raise money while the nursery and pre-school held a “onesie Wednesday” where staff and children dressed up. All the proceeds will go to the National Autistic Society.

Mrs Quarterman, 32, of Windmill Piece, Watlington, said: “I’m really happy with the money that’s been donated but we’re also spreading awareness. Although diagnosis is becoming more common, not a lot of people know about it. It’s good for the children to be learning and to reinforce to parents and share understanding of children and adults with autism.”

Mrs Quarterman, who has two other children, Jessica, nine, and Leo, two, added: “I’m so grateful to the parents who have been so generous as well as the schools and nurseries for their donations.

“We were given £20 notes at a cake sale and told ‘just keep it’. I’m happy to be part of such a lovely community.” Icknield pupil Sarah Emin said: “I think raising awareness of autism is important because people will be more understanding and tolerant and hopefully support those around them who are on the spectrum.

“I also believe it is very important that people understand that no two people with autism are alike and experience it differently.”

Fellow pupil Amy Nicholls said: “To me autism is not an illness nor a problem and never will be. Just because someone is different doesn’t mean you should treat them differently.”

Saskia White, the pre-school supervisor, said: “We have a proud record of working alongside parents and support agencies to welcome children with autism and to ensure that they are confident in taking up their place here in the pre-school as part of our inclusive community.”