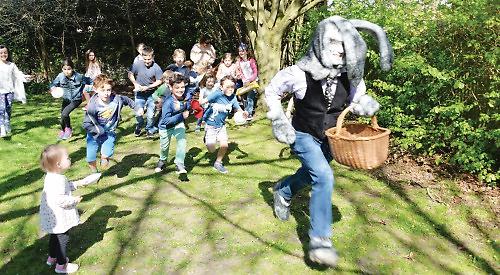 ABOUT 120 children took part in an Easter egg hunt in Watlington in aid of two good causes, writes David White.

The event, which took place in the Paddock, was organised by parish councillors Rachel Huckvale and Fiona Paterson and staff from the Rainbow Corner Day Nursery.

Parents donated Easter eggs and helped out on the day.

Councillor Huckvale’s husband Ben dressed as the Easter bunny and was chased by the children.

There was also face-painting, a colouring competition and a cake sale.

The day raised £525 which will be split between the nursery and the Watlington Hoard appeal to buy a replica of the £1.35 million treasure trove which was discovered in the town 18 months ago.

Cllr Huckvale said: “It was a fantastic day. It was an accessible way for children to understand what the Watlington Hoard is — it’s not every day you find a major historical artefact right in your own town. The Paddock is such a beautiful place to be and it was nice to see it full of children. The motivation for the replica is that we won’t have to go all the way to Oxford.”

She added: “Ben was bringing some Easter cheer. He was hopping around and getting chased by a large number of small children but he survived unscathed.

“As well as hiding the eggs, we also hid a collection of chocolate coins, which was our very own ‘Watlington Hoard’.”

The hoard has since been bought by the Ashmolean Museum in Oxford.

Mr Mather will join Dr Gareth Williams, from the British Museum, to give a talk about the treasure at Icknield Community College on May 5 at 7.30pm.

The event will also be raising money for the purchase of the replica.