Long-serving councillor made an alderman of Oxfordshire 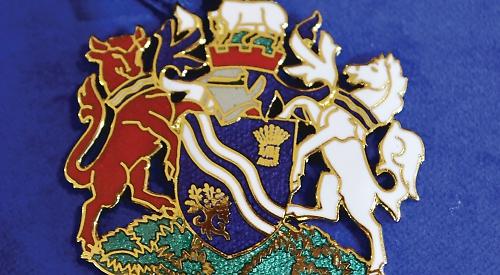 A MAN from Watlington has been made an honorary alderman by Oxfordshire County Council.

Canon Tony Williamson, who is 83, was one of the original members of the council when it was set up in 1973 and represented Labour in various seats in Oxford for 15 years.

He was also an Oxford city councillor and was the city’s Lord Mayor in 1982/3.

He still serves in local government, having been a member of Watlington Parish Council since 1989, chairing it for six years.

He also still works as an associate priest in the Benefice of Icknield, taking services in Watlington, Swyncombe and Pyrton.

Canon Williamson, who lives in The Goggs, was presented with a medal and scroll at an extraordinary meeting of the county council last week for “eminent services”.

Canon Williamson said: “It’s nice people haven't totally forgotten me and to be recognised at the age of 83.

“I feel very fortunate for the terrific experiences I’ve had over the years and the fact that at 83 I am still able to take part in local government and take services in church every Sunday.”

Canon Williamson, who was ordained in 1960, said: “As a priest I didn’t just want to be picking up the bits like an ambulance, I wanted to try to influence events and avoid accidents.

“That took me into activities in local government and to improve the life of local people.”

In the mid-Seventies he was involved in the structure plan that led to the reorganisation of planning and housing for the county. “I was representing the Labour opposition on it and I was involved in some important decisions,” he said.

Canon Williamson recalled: “The Conservatives lost control and it was a hung council, so I was leading the Labour group and running the council with the Conservative group and Liberal Democrat group. There was no party in control.

“There were three of us as leaders sharing decisions and alternating chairing each committee. It was very interesting and I did that for two years.”

In 1987 he ceased to be leader and became co-chairman on the council’s education committee.

For his last nine years on the council he represented Blackbird Leys and was involved in the Greater Leys development, which he supported.

He left the authority in 1988 when he was appointed the diocesan director of education in charge of the team supporting the 270 church schools in Berkshire, Buckinghamshire and Oxfordshire.

Canon Williamson was elected to Oxford City Council in 1961 and sat on its housing committee for almost 25 years, serving as chairman for about 11 years.

In his year as Lord Mayor of Oxford, he attended more than 500 activities.

Peter Clark, chief executive of the county council, said Canon Williamson’s honour was “richly deserved” for dedicated service to his community and his contribution would be long remembered.