MP among crowds enjoying church fete in the sunshine 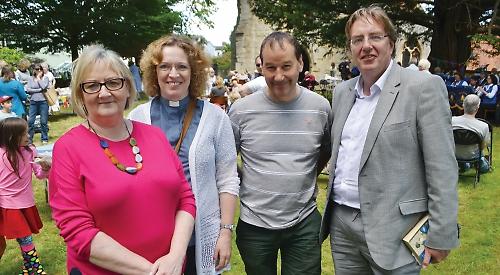 Attractions included a fun dog show with more than 80 entrants, stalls, games, a bouncy castle, barbecue, refreshments and a raffle as well as a tender from the fire station in Gorwell. The Watlington Concert Band entertained the crowds throughout the afternoon. The fete raised more than £2,500 for church funds.

Organiser Heather Morrison, who is a member of the congregation and has been organising the event for six years, said: “It was really well supported.

“To make money is obviously our primary aim because we need to keep the church open but as a community event it means as much. It’s just lovely to see everybody come together and have a nice afternoon.

“Watlington is a really special place anyway — we have got a really good spirit and people turn out and support all sorts of things.

“Everyone I spoke to said they had an absolutely brilliant day and the weather was perfect. The band played all afternoon and they were absolutely amazing. They are great guys and I’ve already booked them for next year. The kids loved the fire engine and the guys handed out fire safety leaflets so it was win-win for everybody.”

Mrs Morrison thanked those who had helped organise the day, including her husband Tom, sons Chris and Tim, who ran the bottle tombola, and their wives Tamara and Annika respectively.