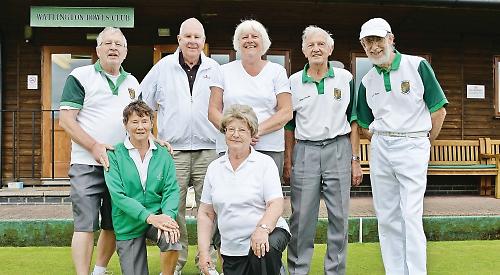 BUDDING bowls players had a taste of the game at a open day hosted by Watlington Bowls Club.

The club, which was founded in 1937, is keen to boost numbers and welcomes players of all abilities.

Club captain David Byers said Sunday’s open day saw about 20 members and guests, with many of the club’s players currently involved in competitions.

He said: “It was an enjoyable, what we call, roll-up. We had a games amongst ourselves and it was a very sociable event and makes a nice change from the high concentration of county competitions. It’s a very sociable and relaxing game and one, if you have any talent, you can take to any level you like really. We like to introduce people, particularly local people, to playing with us.”

The club celebrates its 80th anniversary this year and to mark the occasion two special matches have been arranged.

On July 2 it will host a team of Oxfordshire Presidents and later in the season, on September 7, a team representing The Friends of English Bowling with players from all over the country will visit Watlington.

If you are interested in joining all equipment and coaching is provided and players just need to wear a pair of flat-soled shoes. For more information, visit www.watlington
bowlsclub.com/homeA