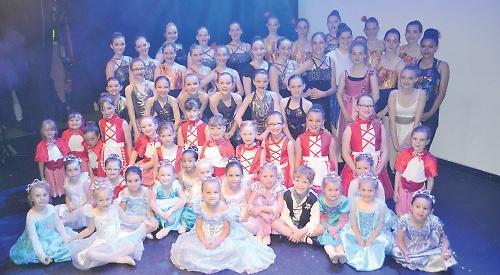 ABOUT 80 children from a Watlington dance school performed at Henley’s Kenton Theatre.

The youngsters, aged three to 18, staged two end of year shows to showcase what they had learned at Performanze to their parents.

The performances included musical theatre numbers, tap, ballet, modern dance and solos, as well as the winners of a choreography competition performing their pieces at the New Street venue.

Committee member Sarah Wood, whose daughter Caitlin Hope, 11, has danced with the school since she was three, said: “It was very much inclusive of all the girls and boys, from pre-schoolers to seniors.

“Both shows were the dances they had been working on for their UKA exams, which they all passed.” School founder Rosie Easton has a dance studio on the top floor of the Watlington Club and also runs classes in Chalgrove and Crowmarsh Gifford.

Performanze, which celebrates its 10th birthday this year, caters for children from Watlington, as well as Benson, Pyrton, Shirburn, Cuxham and further afield.

Mrs Wood added: “It’s lovely to see the boys and girls as they grow up. We filled the theatre both times and the parents were delighted to see their children. There’s very much a family feeling to the school and Rosie has provided a great opportunity for the children.”

She thanked all those who had helped out backstage including mums, grandparents and older girls helping the younger dancers.