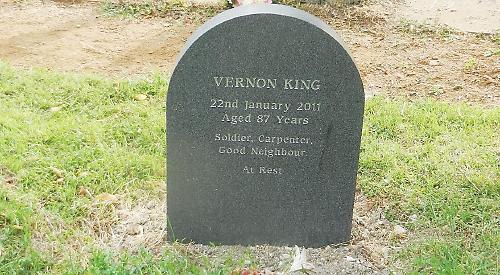 A HEADSTONE commemorating a Watlington man who bequeathed his entire estate to charities and good causes in the town has been installed.

Vernon King died in January 2011, aged 87, but because of his generosity his executors were left with no funds to provide a proper headstone for his grave at St Leonard’s Church.

Instead it was marked by a small temporary plaque.

His friends and neighbours felt that his lifelong contribution to the people of Watlington deserved better and started a campaign to buy a headstone.

The Co-op funeral service agreed to provide and install a headstone free of charge and the Watlington Support Fund paid for the certificate required to install it. The headstone reads: “Vernon King, 22nd January 2011, aged 87 years. Soldier, carpenter good neighbour. At rest.”

Mr King was born in Watlington and lived in Couching Street before the Second World War when he joined the Parachute Regiment.

On his last drop into enemy territory he was shot in the leg. He landed near a Red Cross ambulance which took him to the nearest hospital but doctors were unable to save his leg.

On his return to Watlington, he worked for many years as a carpenter for Walt Stanmore, first in the old saw mill by the Lilacs and later in Homecare.

On his retirement, he set up a small workshop behind his flat in Chapel Street where he made garden furniture.

He also learned to drive and he became a free taxi service for people without transport to get to doctor and hospital appointments.

Mr King was devoted to his brother Clon whom he looked after for most of his life. They are buried next to one another in the churchyard.

The benches facing the war memorial cross in Watlington were provided by a bequest from Mr King.