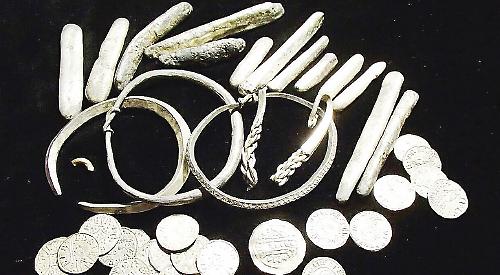 PARTS of £1.35 million treasure trove found near Watlington will return to the town for a free event next month.

Metal detectorist James Mather uncovered the ingots, bracelets and coins in a field in October 2015.

The hoard, from the time of King Alfred, is probably the most important Viking discovery made in Oxfordshire and was acquired by the Ashmolean Museum in Oxford following a fund-raising campaign.

Now selected items are to be put on display at Watlington library on September 23 from 2pm to 4pm.

Visitors will be able to talk to experts about the find and handle objects. There will also be craft activities for children and an opportunity to meet a “Viking”.

Mr Mather and Dr John Naylor, the Portable Antiquities Scheme’s national finds advisor for post-Roman coinage, will give a lecture at the town hall between 1.30pm and 2.30pm. Tickets are free but limited so booking is recommended.

The event is the latest in a series of roadshows being staged around the county by the Ashmolean in collaboration with the Oxfordshire Museum Service.

Watlington parish councillor Terry Jackson, who helped raise £5,000 towards the museum’s appeal, said: “It’s nice to see the hoard return to its spiritual home. We’re very much looking forward to it.

“For people who perhaps haven’t been aware of it, or can’t get to Oxford very easily, it’s really important.”

Watlington has also raised £1,650 for a replica hoard, which will be put on permanent display in the library and should be ready in time for next month’s event.

Councillor Jackson said: “This is really important and part of Watlington’s claim to fame. We’re not just a pretty place, we have a bit of history.”

The find is significant because it contains so many coins of Alfred the Great, King of Wessex (871-99) and his lesser known contemporary Ceolwulf of Mercia (874-879). There are 13 examples of the rare Two Emperors penny, which shows the two kings seated side by side.

This suggests an alliance between the kingdoms of Wessex and Mercia, which challenges written accounts that dismiss Ceolwulf as a puppet of the Vikings.

Mr Mather, a retired advertising and marketing executive from Tilehurst, was delighted with his discovery.

He said: “It is every detectorist’s dream to find something like this, albeit I didn’t know exactly what it was at the time. Most of the coins are in stunning condition.”

He previously gave a lecture at Icknield Community College in May.

More than 700 members of the public contributed to the Ashmolean’s appeal and the Heritage Lottery Fund donated £1.1 million.