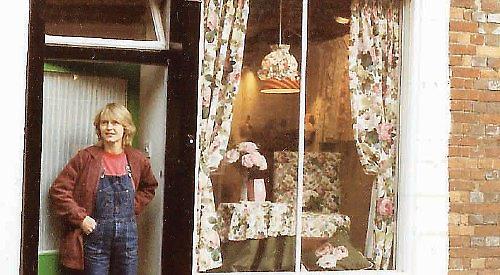 ONE of Watlington’s oldest independent businesses is celebrating its 35th anniversary.

Drapes Design Co, a soft furnishings and curtain manufacturer based in Couching Street, was opened in 1982 by Martin and Karla Edis.

The couple, who live in Watcombe Road, now run the businesses with their daughter Belle Richardson and designer Louise Nisbet.

Mr Edis, 68, used to run the menswear department at Harrods and his wife, now 70, used to work part-time at an interior design shop in Great Missenden, Buckinghamshire.

She made lampshades and cushions and then starting making curtains for customers, helping them to choose fabrics and styles.

The couple decided to go into business together after moving to Brightwell Baldwin.

They began by designing and making curtains in the back room of the shop and were so successful that in 1989 Mr Edis resigned from Harrods so he could devote his time to the design business. The couple then also took over a premises in High Street to use as a workroom, which gave them more space and they still use.

Now Mr and Mrs Edis are semi-retired and Mrs Richardson, who joined in 1999, runs the business with Mrs Nisbet and seamstresses Caroline Mander and Sam Stewart. Another seamstress. Judy Kidman, left last year after 33 years. Mr Edis said it felt “fantastic” to be celebrating 35 years.

“The years just fly by and it doesn’t feel like that long,” he said. “When we started Karla was working part-time in Great Missenden and driving there two or three days a week but there was nothing here in Watlington of that ilk so there was a gap in the market. We thought we’d do it for ourselves rather than somebody else — it’s as simple as that.

“Karla was doing everything herself. She would make everything, would cut the curtains and would machine and handsew them all herself in the first year and then we took someone on.

“It’s very much a niche business but it’s always down to people. Do you get on with somebody? Do you trust them and do you want to work with them? If the answer is ‘yes’ that’s where your business comes from.

“We do have a lot of repeat business but plenty of new customers as well.

“Of course, we’re very grateful that it has given us a living for all these years and we hope that it will carry on. One of the big responsibilities of running any business is employing people and they have got mortgages to pay so we want to keep it going for them as well as ourselves.”

Famous faces to have visited the shop include former chat show host Michael Parkinson and his wife Mary.