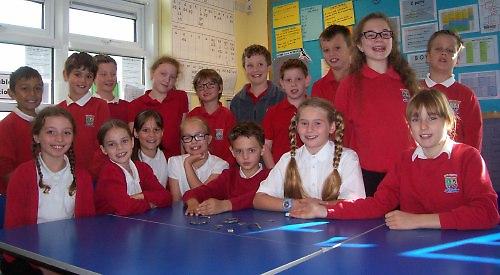 MORE than 550 people viewed parts of a £1.35 million treasure trove found near Watlington when it returned to where it was discovered on Saturday.

Metal detectorist James Mather uncovered the ingots, bracelets and coins in a field near the town in October 2015.

The hoard, from the time of King Alfred, is probably the most important Viking discovery made in Oxfordshire and was acquired by the Ashmolean Museum in Oxford following a fund-raising campaign.

Selected items were on display in the town’s library as part of a day celebrating its homecoming.

Visitors were able to talk to experts about the find and handle objects and there were craft activities for children and an opportunity to meet “Anglo-Saxons and Vikings” in the Paddock.

Historian Tim Horton, who lives in the town and helped co-ordinate the day, said he was delighted with its success.

He said: “It was a landmark day for Watlington and the hoard because we had 559 people pass through the library doors in about three hours.

“It was also memorable for the Vikings set up in the Paddock which attracted hundreds of people, particularly the kids of course, with displays and craft activities on life more than 1,000 years ago.

“What it does is set back people’s reflections on the history of their town beyond a few hundred years to 1,000 years, and that can be very exciting.

“We celebrated the town hall being 350 years old not long ago and on Saturday we took them back a further 700 years to a very different time.

“It was great to have the homecoming in Watlington. We were able to welcome a huge amount of people from Henley, Benson and Wallingford, and quite far afield, so it also puts Watlington on the map and we hope the hoard continues to do that.” Mr Horton said 150 people attended two lectures at the town hall to hear Mr Mather speak about his find. Dr John Naylor, the Portable Antiquities Scheme’s national finds advisor for post-Roman coinage, joined him for the first talk.

Parish councillor Terry Jackson, who also helped organise the events, said: “It was a really good day. The comments we were getting were all positive. The Vikings in the Paddock were brilliant. There was also a display of tools, weaving and wood carving.

“I think the town have really taken ownership of the hoard, the fact that it was found in Watlington and they are going to have to rewrite the history books around it. It’s our hoard and we want to celebrate it.”

Guests included Henley MP John Howell and Oxfordshire County Council’s cabinet member for property and cultural services Lorraine Lindsay-Gale. The day also raised more than £200 towards the purchase of a cabinet to house a replica hoard that it is hoped will be put on display in the library next month.

Mrs Jackson added: “I think it should help tourism. If people see we have got something like this it builds interest and will help with education."

They handled ancient artefacts as well as replicas of the hoard, acted as metal detectorists, held a ‘Making of the Anglo-Saxons' session and dressed as Anglo-Saxons and Vikings. Mr Mather also visited the school for a question and answer session.

The Watlington hoard comprises about 200 coins or coin fragments, seven items of jewellery and 15 bars of silver. The find is significant because it contains so many coins of Alfred the Great, King of Wessex (871-99) and his lesser-known contemporary Ceolwulf of Mercia (874-879). There are 13 examples of the rare Two Emperors penny, which shows the two kings seated side by side. This suggests an alliance between the kingdoms of Wessex and Mercia, which challenges written accounts that dismiss Ceolwulf as a puppet of the Vikings.