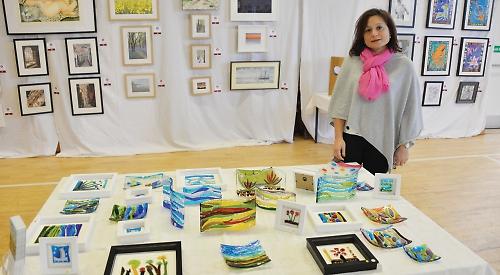 HUNDREDS of people attended the 28th annual Watlington Art Show over the weekend.

Among the exhibitors were Richard Bull, whose work adorns a number of top 10 singles and albums, Simon Tarrant, who takes his inspiration from the natural world and has exhibited paintings at the Royal Academy of Arts, the Royal College of Art and the Saatchi Gallery, and Harriet Riddell, who sews portraits using a bicycle to power her sewing machine.

The show included children’s workshops for the first time. In one youngsters could create pieces using pine cones and clay and in another they made fascinators using recycled CDs, flowers, feathers and glitter.

Organiser Emily Cooling, from Shirburn, said: “I think it was more successful than last year. Twenty per cent of the artists were new and the children’s workshops were really successful.

“We had lots of really positive responses. There were a few ladies from the Henley Guild who were amazed at the content and a lot of people commented on how well the artwork worked together and the flow.”

The show took place at Watlington Primary School in Love Lane and is one of its main fund-raisers for the year.

Mrs Cooling said: “It allows the children to do other creative things in school and the people of Watlington and the wider area to see artwork which they might not necessarily see otherwise on their doorstep.”

About £2,120 was raised for the school’s parent-teacher association from a percentage of sales, refreshments, the children’s workshops and the admission fee.

Mrs Cooling said: “It was a great success because we topped last year’s total. It was nice to see a lot of new artists and work and the variety.”