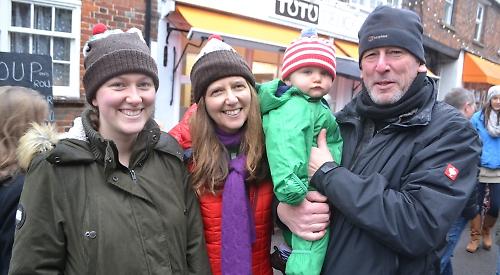 The 13th annual event, held in High Street on Saturday, raised about £2,000 for good causes.

Father Christmas arrived in a fire engine and was met by girls from the Performanze Dance and Singing group and the Watlington Concert Band before making his way to his grotto in the parish office.

There were 44 stalls from a mixture of businesses, charities and community groups, including the Women’s Institute, Rainbow Corner Day Nursery, Age Concern and the Beacon Festival.

In the Watlington Club were another 10 craft stalls selling gifts. Calnan Brothers butchers ran a barbecue outside its shop.

The raffle was drawn by husband-and-wife actors Jeremy Irons and Sinead Cusack, who live in Hill Road.

The proceeds will go towards the cost of the town’s Christmas lights and to youth groups which helped out on the day, including the scouts and the youth club.

Robin Holmes-Smith, who runs the Granary in High Street and is chairman of the organising committee, said he was pleased with the turnout despite some rain.

“It’s worth doing,” he said. “It brings people of all ages together and without it we’d become a much deader place.

“New people realise what there is in the town, which is really good.”

The fair was previously run by Sam Swanson, who runs Chiltern Pet Partners with her husband Adam.