Butcher says his seasonal 'steak school' is a cut above 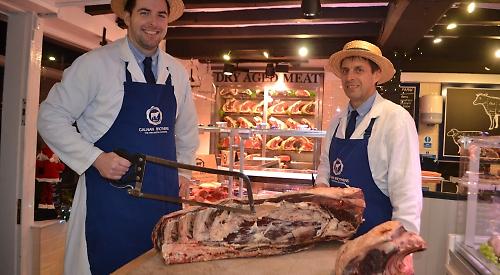 A BUTCHER showed customers how to get the best from their beef at an evening “steak school” .

He demonstrated where the different cuts are located, including less well-known ones, with the help of shop manager Kevin Page.

Mr Calnan said: “You have got your traditional rump, sirloin and fillet steaks but we wanted to expose people to steaks they might not have tried before.

“We were there for an hour cutting and people could ask questions.

“They loved it. They didn’t realise there were so many different cuts of meat. It gave them a bit of confidence to try different steaks.”

The group then moved to the Fat Fox Inn in nearby Shirburn Street, where they could try a taster menu of steaks, including featherblade, bavette and rump, prepared in different ways.

This was followed by a cheese tasting talk by Robin Holmes-Smith, proprietor of the Granary delicatessen, also in High Street.

Mr Calnan added: “Christmas is always a foodie time and this is always a good event. We’ll do another one next year.”

Previous demonstrations have included pork and lamb as well as beef.