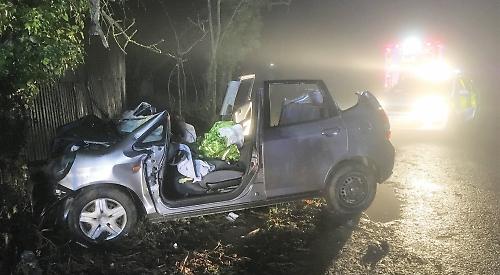 AN elderly couple were seriously injured when their car crashed into a tree in thick fog.

Firefighters and paramedics were called to the scene in Hollandridge Lane, Christmas Common, at about 5.30pm on Saturday. The couple were cut out of the Mini Cooper and treated at the scene before being taken to the John Radcliffe Hospital in Oxford with what were described as severe injuries.

Thame fire station manager Andy Ford said: “The car had collided head-on with a large tree and both occupants suffered serious injuries. Fire crews quickly gained access to the car, allowing the couple to be treated by paramedics. They then cut the roof off the car and safely removed the couple.

“Oxfordshire Fire And Rescue Service would like to remind all road users to take extra care when driving during the winter months, especially on rural roads that may even be familiar.” Fiona Beckley, who runs Christmas Common Conserves, said the road is difficult to drive along, partly due to a nearby house refurbishment.

She said: “There is a massive renovation going on so the road is very gritty and muddy. If you add in the rain and surface water then it becomes quite treacherous.”