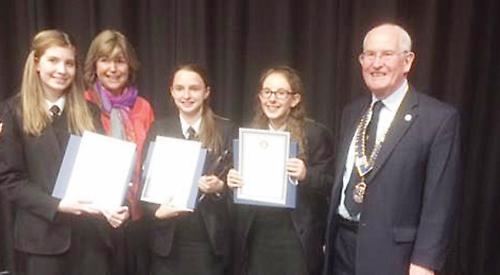 THREE year 9 pupils from Icknield Community College in Watlington triumphed in the heat of a public speaking contest.

Their presentation was called “The tyranny of teenage stereotyping”.

Among the other teams challenging them were from Icknield year eight pupils Maddie Jennings, Isla Saint and Neil McCarthy, who spoke on “The magic of reading.”

In the senior competition year 10 students Esmee Knight, Charlotte Berry and Molly Lyon presented “Feminism in 2028: What will it look like?”

Each team comprised a main speaker, a chairperson and one who gave the vote of thanks.

The main speaker was allowed to speak for six minutes and the other two, two minutes each. Headteacher Mat Hunter said: “I am thrilled to report that all three teams were tremendous competitors.

“Standing up in front of a room full of strangers is demanding and stressful yet all nine students were poised, eloquent and a credit to themselves and the wider school community.

“Their energy and disposition received many complimentary remarks from the panel of judges. I am very proud of them!”

Year nine teacher Jacqui O’Reilly said: “It’s only the second year we have taken part. The girls did a very considered performance and were utterly shocked when they were told they had won.

“They really did prove to be the best team on the day, which was really rewarding. They are a credit to themselves and the school.”

The annual competition is designed to help young people develop their self-confidence and presentation skills and culminates in a national final.