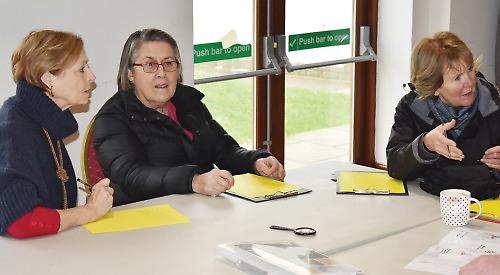 The idea proved to be the most popular during a public consultation event on a traffic management plan for the town.

• Installing chicanes on the town’s entry routes, including Cuxham Road, Howe Road (B480) and Shirburn Road (B4009).

More than 160 people attended an exhibition about the plan at the Watlington Club in High Street on Saturday. A total of 130 feedback forms was completed.

The use of automatic number plate recognition cameras to enforce a 20mph limit and to crackdown on unauthorised HGVs using the town as a “rat run” also proved popular.

The least popular proposal was the introduction of speed humps along the B4009 Britwell Road, where the consultants suggested upgrading the existing speed cushions and having speed humps along the B480 Brook Street to maintain the speeds of vehicles approaching the town centre. Gill Bindoff, facilitator of the Watlington neighbourhood plan forum co-ordination group, said many of the exhibition visitors spent a long time looking at the proposals.

She said: “We got something like 130 feedback forms, which is serious engagement by people in our community on the whole issue of traffic and transport.

“People strongly supported the idea of introducing 20mph speed limits in the town. In a way that wasn’t a surprise.

“The good thing about it is that it’s not that expensive to introduce and it’s very widely used in residential areas these days.

“We want to reduce the congestion which causes the pollution — it’s a chicken and egg thing.

“The principle is if you slow the traffic on the town edges, then you can manage it better as it flows through the centre.

“We’re not in a position to say ‘right, we’re going to go ahead with that’ because it has to be discussed and agreed with Oxfordshire County Council but we do feel we would be able to get ourselves in a position where that could be introduced reasonably quickly.

“It will need to be funded. There’s a cost and we need to explore how that can be met.”

Mrs Bindoff said her group needed to talk to Thames Valley Police about the introduction of ANPR cameras.

She explained: “It’s no good if the evidence they provide can’t be used by the police to follow through with any prosecutions. We need to find out the detail of what is acceptable to them.”

She said the idea of speed humps was greeted with “howls of protest”.

“People were saying that ambulance vehicles really find them difficult and obviously nobody wants to put any barriers in their way,” said Mrs Bindoff.

“They also felt they generated quite a lot of noise, depending on the speed that people go over them.”

The Mode plan is part of the Watlington neighbourhood plan, which names three sites for up to 260 new homes and is due to go to a referendum in the spring.

Henley MP John Howell, who attended Saturday’s event, said: “It was interesting to see the results of their traffic work coming out in the displays.

“Certainly improvements will be needed to be made to the infrastructure and, of course, the housing that’s going to be built there will require a road around Watlington to be built.

“The traffic-calming measures that they are looking at are an interesting addition in the mix. It’s so rewarding to see the amount of advancement they have made.”

The Mode report says a 20mph speed limit would ensure “a safe environment for pedestrians and cyclists” and could be enforced using ANPR cameras.

The chicanes on the entry roads would reduce the speed of vehicles from 50mph to 30mph and then to 20mph before they reach the town centre.

The report also suggests introducing traffic signals at the junction of Couching Street, Hill Road and High Street, which is a pinch point, and the two T-junctions of Love Lane and Shirburn Road and Brook Street and Couching Street.

A “no entry except for access” sign would prevent High Street being used as a cut-through by drivers to avoid congestion at the southern end of B4009 Couching Street and at the Brook Street/Couching street junction.