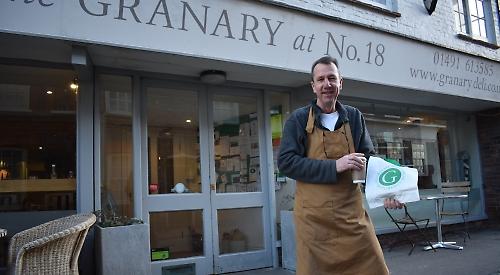 THE Granary delicatessen in Watlington has been almost totally plastic-free for years.

The High Street business was founded in 1985 as a cheese shop and deli and taken over in 2002 by Robin and Francesca Holmes-Smith.

The couple moved it from the original premises further along High Street, where the business expanded to include a 28-seater café in October 2013.

It uses compostable cups and deli containers while its carrier bags are made of corn starch and therefore compostable too.

Mr Holmes-Smith decided early on that he didn’t want to use plastic at the deli and set about replacing the usual disposable containers with more eco-friendly versions.

He said: “We took the decision many years ago to try to do all we could to get rid of plastic. The coffee cups and lids, carrier bags and all the deli pots we use are compostable.

“There are some things we haven’t been able to replace yet but we are having another go to try to find decent substitutes.

“If it’s possible to use something that’s going to deteriorate and not harm the environment then do it — that’s the point. We are trying to sell a natural product, so why poison the environment with rubbish used to package it?”

Mr Holmes-Smith said he had struggled to find alternatives until he discovered Vegware, a company which provides eco-friendly packaging for food and drink.

He said: “We decided from the get-go but it took quite a long time for us to find the suppliers. We took over in 2002 but we didn’t find Vegware until a few years later.

“As soon as we found them we got everything we could from them that was biodegradable but even now there are things that we can’t find to do the right job.

“In terms of the weight of plastic we produce it’s not very much at all.

“This is about balancing finance with being eco-friendly. If we were churning out tons of plastic waste it wouldn’t be good.

“It is more expensive but I think it’s important to do it. It makes a difference to customers. Even so, our recycling bin is pretty much full every week with cardboard and plastic bubble wrap. The only thing we can do next is look at alternatives for the two plastic products we use, which is a film for wrapping ham and soft cheese and a clingfilm for sandwiches.

“Even Vegware don’t have alternatives for that as their film is a cellophane like you would wrap a bouquet of flowers in and that’s useless for cheese.”

Mr Holmes-Smith said that even the compostable containers have their drawbacks.

He explained: “The cups aren’t recyclable, so there’s a big difference in what you can do with them.

“They can’t go in the recycling bin or as food waste. You can put them in with your compost but not everyone has compost. It can go into landfill and will fall to bits and degrade, which is better than plastic which doesn’t do that.”

Government plans to cut down on plastic waste include encouraging supermarkets to introduce “plastic-free” aisles, extending a 5p charge for plastic carrier bags to all retailers in England, funding for plastics innovation and a commitment to help developing nations tackle pollution and reduce plastic waste.

It previously agreed to ban plastic microbeads from being used in beauty products, which came into effect last month.

MPs are also calling for a 25p “latte levy” for disposable coffee cups, many of which contain a polyethylene lining which makes them difficult to recycle. Mr Holmes-Smith said a charge on non-recyclable coffee cups would encourage businesses to change to compostable ones but he wanted to see measures to tackle plastic waste brought in much sooner than 2042.

He said: “I was stunned by Theresa May’s statement. She should have said it will happen in three or five years to get the bosses to sit up and say, ‘we better get on with this’. It’s about doing whatever it takes to force change quickly.

“The next thing we are looking at is reusable cups and whether we can sell those. I do think it will be like carrier bags, which people don’t carry enough. I don’t think people will carry a cup around with them and it’s about changing consumer behaviour.

“A few of our customers bring in reusable cups. It’s becoming more common but it’s not a big thing yet.”

Mr Holmes-Smith said he felt it was important to do his bit for the environment, even if it cost him more money, but that real change would have to come from consumers rather than businesses.

He said: “Whether people will go to a certain place because they use compostable stuff I don’t know. Is it a big draw for some people?

“We are one of two places in Watlington that serves takeaway coffee so at least half the people are having it in compostable cups and all the deli customers.

“It’s one of those things where we thought we should do whatever we could but it’s not enough by a million miles.”