Snowdrop teas off to good start despite bad weather 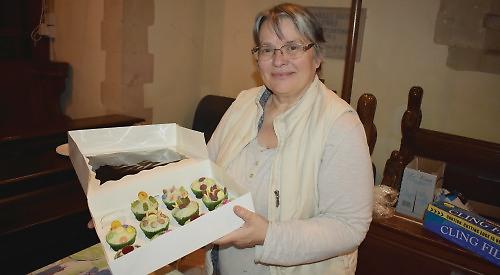 THE first of this year’s snowdrop teas weekends in Swyncombe raised more than £2,260.

The annual event, which is now in its 22nd year, is held at St Botolph’s Church over three consecutive weekends.

Hundreds of people come to see the carpet of white flowers in the graveyard and enjoy tea and cakes.

All the money raised goes towards the maintenance of the church, which dates back to the Normans.

On Sunday, the rector of Watlington Rev Daniel Thompson blessed the snowdrops with help from four-year-old Caroline Huckvale, the daughter of former parish councillor Rachel Huckvale.

Rev Thompson rang a bell around the church before a small group of visitors gathered in the churchyard.

He held a watering can while Caroline poured holy water into it from a milk carton. Rev Thompson then gave the blessing and encouraged her to sprinkle the snowdrops from the can. She was helped to empty by another volunteer.

On Saturday, the number of visitors was down on previous years due to the bad weather.

Churchwarden Hilary Cox said: “We had hailstorms and it was a chilly, cloudy and thoroughly damp and depressing day. Even so, we had a reasonable amount of people attend, many of them regulars.

“On Sunday the sun shone and we certainly had a lot more people, children and dogs and lots and lots of cake was consumed.”

A stall sold mugs depicting the church and bookmarks designed by John Sennett featuring one of its stained glass windows.

There were also cards showing the snowdrops designed by Shelagh Stevens, who organised the weekend with her husband Peter.

There will be more teas tomorrow (Saturday) and Sunday and on February 24 and 25 from 2pm to 4pm daily.

Tea and cakes, preserves, chutneys and pickles will be for sale and visitors will be able to buy snowdrops grown by the congregation.

A choral evensong will be held on Sunday at 4.30pm.

Before this Denis Pepper, an authority on St Botolph and author of the only two books about the patron saint of travellers, will be visiting.

In the 7th century, St Botolph returned from his studies in France and went to Iken in Suffolk, where he asked the local King Anna for permission to start a monastery in “the least pleasant part of his kingdom”.