Girl has hair cut to support brother before brain surgery 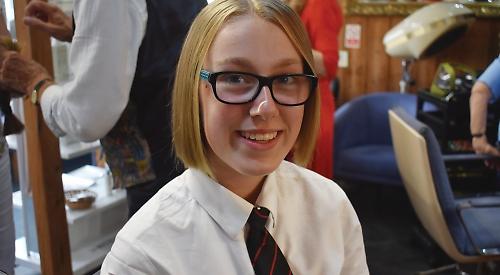 A TEENAGER had 1ft of her hair cut off in support of her brother before he underwent brain surgery.

Ella Baker, 14, of Brook Street, Watlington, wanted to show solidarity with 10-year-old Elliott, who has a condition called kernicterus, a type of brain damage he suffered as a baby as a result of jaundice.

Elliott had to have his head shaved before the operation at the Evelina London Children’s Hospital so his sister had her hair cut too.

Her hair was then donated to the Little Princess Trust, which makes wigs for children who have lost their own hair due to cancer treatment and other illnesses. The children’s mother Caroline said: “Elliott was jaundiced as a baby and it has given him central brain damage. It affects his hearing, eyesight, speech and motor functions but cognitively he is completely normal, very bright, and he goes to a mainstream school, Watlington primary.

“He had something called deep brain stimulation at the hospital. This involved putting two electrodes in the central part of his brain and connecting it up to a battery which sits in his pelvis.”

Mrs Baker said the procedure should help calm her son’s involuntary movements which disturb his sleep and cause problems when he eats or reads.

The family were talking about Elliott having his head shaved when Ella came up with her idea to show support.

Mrs Baker said: “Elliott was concerned about after the operation and people staring at him so Ella said, ‘why don’t I get my hair cut?’ She had been growing her hair for about five years so it was a big deal.”

She had her locks chopped at the Hair by James salon in Shirburn Street, Watlington, by owner James Gerring four days before Elliott’s operation.

Ella said: “I last had short hair in primary school and I’ve spent a long time growing it to get to this length but if it makes Elliott feel better I’ll do it. He just wants me to shave my whole head!

“Thirty centimetres will make a whole wig for a child. A person who has lost their hair to cancer can feel really conscious so it can make them feel better and it’s natural.”

Ella, a pupil at Icknield Community College where her brother will start in September, was also sponsored to have her hair cut and raised £1,600, which will pay for three weeks of physiotherapy for her brother.

Mr Gerring, who has been cutting the children’s hair for years, said Ella’s effort was “absolutely fantastic” and he felt proud to have been involved.