Gang foiled in 2am smash and grab raid 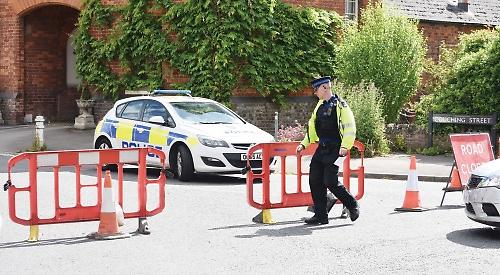 A GANG of masked raiders smashed the windows of a convenience store and dragged a cash machine into the street before trying — and failing — to steal the contents.

Up to five men wearing balaclavas were involved in the raid on the
Co-operative store in Couching Street, Watlington, in the early hours of Thursday last week.

Witnesses said they used a sledgehammer and a crowbar to break into the shop and then used an angle grinder to get the machine out. Witnesses reported seeing sparks.

They then spent several minutes trying to break into the machine before fleeing and being chased by the police through two counties.

The raiders left their tools at the scene and the street was covered in broken glass and bits of the cash machine.

A woman who lives in the street raised the alarm after being woken up by the commotion shortly before 2am.

She said: “There were several blows — four or five — and then the Co-op alarm started, maybe 10 seconds after the first blow.

“At the second blow I left my bed urgently and quickly went into my son’s bedroom and could see that it was the Co-op being broken into, as I suspected.

“I could hear voices and they didn’t seem to be worried about making lots of noise.”

She dialled 999 and stayed on the phone while watching the raiders trying to get the cash machine out. “They started off with a hammer and they were shouting at each other,” said the woman.

“Then they started using an angle-grinder and were making an enormous amount of noise. We could see sparks coming from the front wall of the building.

“At the time I thought they were still trying to break into the building but now I wonder if the sparks were coming from inside the Co-op as I am pretty sure that they did not pull the machine out until after this.

“Then I heard the engine of a vehicle revving and saw it reverse at speed towards the Co-op. It was driven forwards, again at speed, and there was a terrific crash.

“The gang seemed to be panicking by this point. There were lots of banging and crashing sounds in the street together with shouting between gang members.”

The woman said she believed the gang fled in two vehicles before the police arrived.

She added: “What was shocking was the ruthlessness and the anger and the fact that they weren’t at all concerned about who saw them or what they were doing. There wasn’t anything subtle about it at all.

“It’s just lucky nobody was driving through Watlington at that time because they were so fired up I wouldn’t have liked to have said what could have happened.”

The police chased an Audi A3 through Oxfordshire into Gloucestershire using cars and two helicopters.

The shop has handed its in-store CCTV footage to the police.

A spokeswoman for the Midcounties Co-operative said: “An incident took place at the Watlington store in the early hours of June 21 when the store was closed and no colleagues were present.

“We are assisting the police with their investigations.”

Danny O’Loughlin, 20, of Waterloo Street, Cheltenham, was released on conditional bail to appear at Oxford Crown Court on July 20.