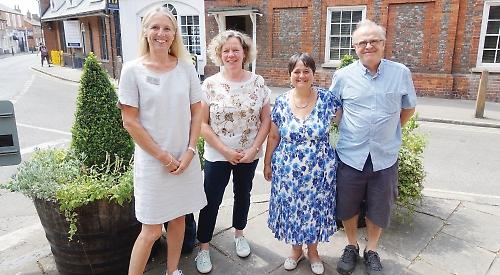 JUDGES from Thames and Chilterns in Bloom have visited Watlington after it entered the competition for the first time in three years.

Victoria Newton and Kate Dagnall took a tour of the town, which has entered the large village category, on Wednesday last week.

It commenced at the town hall where Terry and Keith Jackson, of Watlington in Bloom, showed them the new planters cared for by Harriet Holgate Interiors and K is for Kitchen.

They admired the hanging baskets at the Watlington Club in the High Street and the decorated hoarding outside the former DG Homecare shop, which was gutted in a fire in April last year.

They then made their way up Davenport Place passing the new wall being built and Summer Cottage, one of the gardens that opened for the town’s open gardens day last month.

Mrs Jackson said: “We went into the lovely Paddock Gardens and showed the judges the recent addition of the play equipment in Little Ted’s Play Area and Little Ted’s herb garden.

“Local mums have organised a watering rota which I think impressed the judges too. We talked about the various uses for the gardens to demonstrate what a widely used green space it is — pop-up cinema, Viking re-enactment and Easter egg hunts.”

From here they passed the library in the High Street and the planter adopted by Cross Antiques and showed Mrs Newton and Mrs Dagnall the war memorial and the adjacent tubs cared for by residents with the two new box cones planted earlier this year by volunteers.

Next up was the public toilets in Church Street which Watlington Parish Council has paid to be refurbished this year. They then wandered up to the new Cuxham Road triangle project which was well under way, although not quite complete.

Mrs Jackson explained: “It is a vast improvement on what was there, which proved to be somewhat of a litter magnet in the past.

“The plan is for this to be an attractive but low maintenance area, thus the ‘dry riverbed’ theme seemed ideal and it reflects the presence of the chalk stream opposite. There will be some minimal planting and hopefully a curvy bench.

“After showing the judges the work that has been done by the Watlington Environment Group watercourses project across the road in the Marlbrook estate we then got in the car and drove up to Watlington Hill where we met with the new National Trust ranger Matt Bond.

“We looked at the view and the wildflowers and learned about the management of the hill and the involvement of volunteers, especially the Friends of Watlington Hill, who work up there about once a month. That was the end of the actual tour and we took the judges back to the town hall where they perused a display and PowerPoint presentation over a coffee and then had delicious refreshments provided by the Granary Deli.

“I think the judges enjoyed their visit and hopefully had a good impression of what Watlington is like and the community involvement we’ve had this year.

“Thanks to all those that took part in our litter picks and action days and all our garden openers. Also, thanks to all of you who swept and tidied your own little patch — I’ve noticed some lovely new pots coming out over the last few weeks.

“It all helps not just for the Royal Horticultural Society, but to make it a more pleasant place to live, work, and play.”

The results will be announced in the early autumn.