Cleaning is good for us and town, says taskforce leader 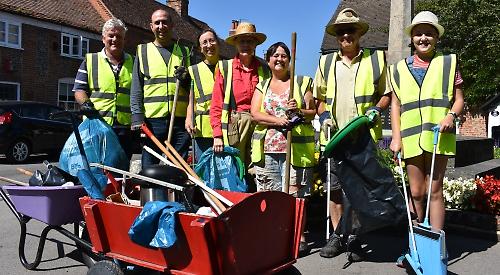 A NEW taskforce in Watlington collected more than 30 bags of weeds, clippings and rubbish on Sunday.

The volunteers are helping to keep the town tidy with a clean-up on the first Sunday of every month. They pull up weeds, pick up litter, sweeps pavements and roads and cut back hedges.

Twelve volunteers gathered for only the second time on Sunday and focused their efforts on Shirburn Street, an entrance road to the town.

Organiser Jenny Wilkinson, 74, of High Street, said: “When I see things that I really think need doing, I champion them.

“The town has got very scruffy because in the old days the council came and cleaned the streets but they don’t do that anymore. If they are not going to do it either we live in a mess or somebody has to do it.

She said the group would respond to requests by residents for areas that needed tidying.

When the volunteers first met last month they tidied up the town in preparation for a visit by judges from the Thames and Chilterns in Bloom competition.

Mrs Wilkinson, a retired IT manager, said she wanted to keep this momentum going.

She said: “We want to keep the place nice and make people think about the frontages of their houses. If everybody does a little bit, the job gets done.

“People don’t realise how it lets their properties down if they are sprouting weeds.”

She was inspired to start the group after attending a workshop called the Unusual Suspects, run by Community First Oxfordshire, in Harwell earlier this year.

This was designed to encourage more people to volunteer and get involved in their communities.

“It was really quite inspiring,” said Mrs Wilkinson. “What was crystal clear to me was we need people to co-ordinate. You get people thinking ‘it would be nice to do something’ but they don’t know what to do or how to do it and it seemed there was a need for some facilitation.”