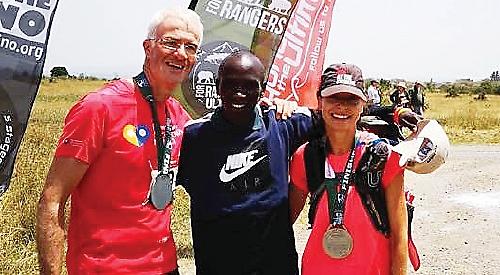 Friends Liz Winton, 44, and Enda Brady, 42, completed the first ever For Rangers Ultra endurance challenge over five days while carrying 9.5kg of food and equipment in temperatures reaching 32C.

They ran through five conservancies, where poaching is rife, encountering elephants, giraffe, zebra and water buffalo.

Mrs Winton, who lives in Court Close with her husband Andrew and three sons, Robert, Oliver, and Harry, is a former Watlington parish councillor who works as a childminder.

She raised more than £3,500 for the rangers and the charity Save the Rhino while the event itself raised a total of £64,000.

Kenya’s rhino population has been decimated as poachers target the animals for their horns, which fetch high prices in the Far East.

Mrs Winton, who has run the London Marathon for Save the Rhino three times, signed up for the challenge a year ago.

She said: “It’s a self-sufficient, multi-stage ultra so you have to carry a rucksack with your sleeping bag, two litres of water, all your food for five days, medical equipment and anything else you might need. It’s not light — I have the scars to prove it!”

She trained by running four to five times a week with a weighted rucksack, clocking up distances of between seven and 23 miles.

Mr Brady, a Sky News journalist, had to train while covering the World Cup in Russia for five weeks.

The pair flew to Nairobi on July 30 and the following day they and the other 44 runners took a six-hour bus ride to the Lewa conservancy, where the challenge began at 8am on August 1.

Mrs Winton said: “I was keen to get going and so excited but not having a clue what to expect.

“It was so special because you’re not normally allowed to run through the conservancies.

“It was quite mixed terrain with the familiar Kenyan red dust and crossing little streams and bridges. We did get lost at one point and a man on horseback had to come and correct us.

“Every so often there would be rangers flying over the course in a helicopter to move the animals off the route. If anything wanted to pass we would have to stop and let the animals cross.” Each leg was a different distance ranging from 38km to 46.5km and the longest took the pair seven hours and 25 minutes to complete.

Mrs Winton said: “It got harder but the rucksack got lighter as we went on. The accumulative effort of running that distance meant your body was a bit tired and maybe you weren’t running as well as you would usually.

“We were protected the whole way along the course by the rangers. On stage three we were approaching the checkpoint when four rangers arrived and a jeep turned up as there was a family of elephants who wanted to get from one side to the other.”

At each checkpoint a team of volunteer medics and doctors checked over the runners, particularly their feet. Mrs Winton said she developed multiple blisters, which she had to tape up.

At the finish she and Mr Brady were presented with their medals by Kenyan long distance runner Eliud Kipchoge, who won the marathon at the 2016 Olympics in Rio and this year’s London Marathon.

Mrs Winton said: “I was just elated. It was an experience of a lifetime and I don’t think I’ll ever beat it. It was the combination of what we were running for and having the opportunity to see the animals and running so close to them.”

Mr Brady, who trains with Mrs Winton, said: “I’m very proud that we both finished it safe and well and we have memories for the rest of our lives.

“We run on the Ridgeway in Watlington and we see squirrels, deer and people with dogs and the next thing we’re in Kenya and there’s a herd of wild elephants crossing in front of you.

“Rhino will exist for decades in Kenya off the back of the money Liz and other people like her have raised — it’s fantastic to see. I’m so grateful to Liz for such an amazing experience.”

Mrs Winton said the main aim of the event was to raise awareness of the rangers’ work.

“The money we raise is going towards their training, welfare and equipment,” she said.

“Save the Rhino is keener than ever to get more rangers involved in their protection so by raising money and being able to offer them things like life insurance for their families people will see this as a career.”

Before flying home, she had the chance to meet the last two remaining northern white rhino which are kept under guard in Ol Pejeta.

“It was fantastic and yet so sad,” she said. “I cried quite a lot as it’s just horrendous to think you’re looking at the last two sub-species of an animal. This will be with me for life now — it was the best five days of my life. I loved having my children but this was just something so special.”