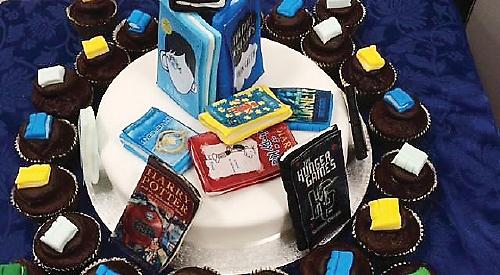 A NEW library opened at Icknield Community College in Watlington for the start of the new academic year.

It is located in the secondary school’s former citizenship room, which has been refurbished.

The library was officially opened by its senior student librarians, who cut a ribbon. Teachers, parents and governors attended the event and the Friends of Icknield provided glasses of bubbly to toast the occasion.

David Marcou, the chairman of governors, cut a library-themed cake featuring miniature edible books which was made by librarian Nicky Eales. Year nine teacher Jacqui O’Reilly said the library was an up-to-date facility that would meet the needs of the school.

She added: “It is an outstanding resource of which we are justifiably proud.”

Mrs O’Reilly paid tribute to Mrs Eales and the team who worked throughout the summer to get the new facility ready.

Every English class in each year group will have an induction lesson in how to make best use of the library.

It will also be used for the homework club which takes place after the school day.